Kelly McCarthy Posted on May 26, 2011 Posted in Uncategorized

EXTENDED BY POPULAR DEMAND! The Manx Crosses Exhibition has now been extended  until the end of July and will run alongside a smaller exhibition by the Fishermen’s Mission from mid-June. 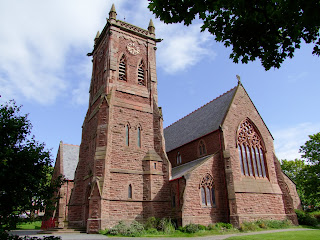 An exhibition of Manx crosses held at St German’s Cathedral in Peel proved to be a valuable introduction to the beautiful and intricate carvings of early settlers on the Isle of Man from both the Celtic and Norse tradition.

Although replicas of the original stones, supplied by Manx National Heritage, the exhibition justifiably awakened a natural appreciation of their value, both historically and spiritually, to our society. Examples, displayed throughout the cathedral, gave visitors the opportunity to reflect on their meaning and learn more about their evolution. 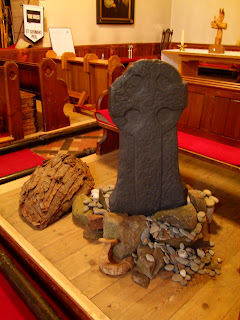 Accompanying each of the crosses was an example of the work of the Manx artist and designer Archibald Knox. Extracts were taken from ‘The Deer’s Cry’, widely believed to be his seminal work, and reflecting his personal Christian faith. 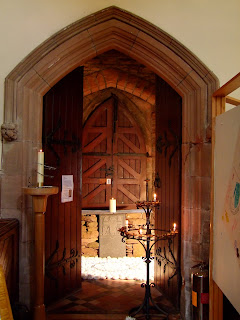 The crosses on show represented many of those scattered across the Island, including the unique Crucifixion Stone from the Calf of Man, the unusual Wheel-Headed Celtic Cross found at St Adamnan’s (Lonan Old Church) and an interesting example of an Adam and Eve Stone, a 13th century carving sculptured in the Norman tradition and recovered from the parish of Bride. Others carried inscriptions giving tantalising clues about either the carver, or the person who commissioned the work, with examples here from the parishes of Andreas, Michael and Ballaugh.
But with on-going development in design it was also appropriate to display the striking headstone of the aforesaid Archibald Knox, together with  a modern memorial from a local company bearing Celtic influence and the more contemporary design of the ‘Garwick Crosses’ by local carver Simon Capelen.
The exhibition was complemented by the use of silk hangings evoking the era of Celtic saints, silk vestments worn by the clergy and an eye-catching icon of St German, patron saint of the cathedral, placed in front of the altar.
Valerie Caine © May 2011 (inc photos) 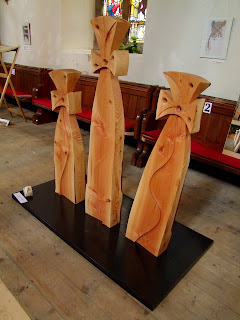