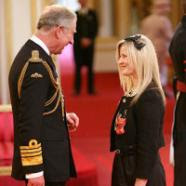 The highest profile female racer in the UK was forced to resort to her favourite mode of transport in the rush to get to Buckingham Palace on time.

Maria Costello got stuck in traffic being driven to receive her MBE from the Prince of Wales, so jumped on a motorbike – despite being dressed up for the royal occasion.

Costello, who held the world record for being the fastest woman around the famous Isle of Man TT circuit, said afterwards: “We got stuck in traffic so my friend who works for Virgin taxi bikes took me.

“You wear an apron so my modesty was preserved. I did change my heels into flats though.”

“I wanted to come by motorbike but not like that,” she joked.

The 32-year-old from Spratton, Northamptonshire, had no time to change into her leathers for the impromptu ride so rode on the bike in a short black skirt, matching jacket, sheer black tights and numerous strings of pearls around her neck.

She said she was delighted her parents Eileen and George and sister Tina made it on time to see her collect her award.

“This is the payback for what I put them through – all my injuries. It’s not a regular thing having a daughter who rides a motorbike. I’m just so glad my parents and sister were here to see me.”

Costello said she began racing thanks to compensation money she received after being in a motorbike accident.

Costello was the first woman solo racer to be on the podium in the history of the Isle of Man TT and Manx Grand Prix. She added: “The Prince said, “Did you come by motorbike?” and I said, “Yes I did”.

Photo: Maria Costello, the highest profile female racer in the UK, receives an MBE for services to motorcycling from the Prince of Wales

From the Press Association: here.