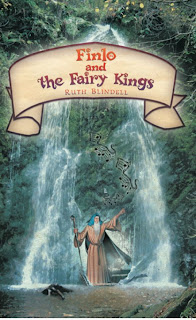 See our earlier entry on this.

This is Ruth Blindell’s first foray into the world of fiction with the Dhoon Glen on the north-east of the Island playing the central role in a truly Manx adventure. One of the author’s favourite places to visit, she has skilfully introduced the glen as a backdrop for a raft of new characters attempting to save their home from the avaricious William Pratt, with an early introduction to the ‘Keepers of the Glen’ and the prickly relationship between Smayr and Connee who rarely see eye to eye.

Using her own photographs and Katie Quine’s artwork (her niece), Ruth has combined her talents and introduced traditional music and song with a sprinkling of Manx Gaelic, and a useful glossary of Manx dialogue as an aide memoir.
Ruth’s vivid imagination has conjured up an easy-to-read story inviting the reader into an enchanting world they probably never knew existed, where Manx mythical characters join the ‘little people’ in their quest to outwit the ‘giants’ and save their beloved glen. As the story develops the reader will discover why the threatened inhabitants were eventually obliged to invade the Tynwald chamber and why twin fairies zip!
Included in the book is a map showing the location of Dhoon Glen with an invitation to explore features from the area which Ruth has incorporated into this enchanting tale.
It’s now available from many of the Island’s bookshops, Peel newsagents and a selection of Manx National Heritage outlets priced at £11.50 and also from www.authorhouse.co.uk  and Amazon .
Valerie Caine, © August 2012 (Courtesy of Manx Tails)