Kelly McCarthy Posted on January 23, 2012 Posted in Uncategorized
Written by Ruth Blindell (it only took her seven years!),  a teacher at the Manx language school on the Isle of Man (Bunscoill Ghaelgagh) this is a bi-lingual book  in Manx and English. It went live on-line for purchase today. A portion of the sales made in the first month will go to school funds. Finlo and the Fairy Kings has lines of Manx music and songs in the book that help to tell the story. It’s 216 pages long and aimed at 10-14 year olds or adults with an interest in Manx traditions, language, songs and music. 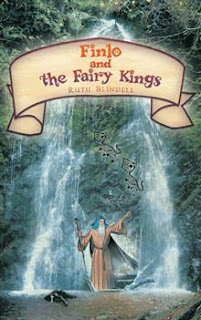 Is Finlo just dreaming or are there really fairies loose in the Dhoon Glen? Who are the Fairy Kings and the Mooinjer Veggey? Join Finlo on a Manx adventure with a sprinkling of fairy dust, Manx Gaelic, traditional music and a few local songs in Manx and English. Follow his father – the Right Honourable Mr Cowin – along with a couple of ghosts and the Little People as they battle to save the magical glen from the destructive plans of the Right Honourable Mr Pratt, a cliff full of seagulls and a squadron of ruthless R-A-Ts.
For sale now through authorhouse.com – e-book £2.55 – a real paper one £7.50