First–ever Isle of Man Festival of Choirs – a Triumph!

Kelly McCarthy Posted on October 21, 2010 Posted in Uncategorized
There must be American choirs that could give the British ones a run for their money! 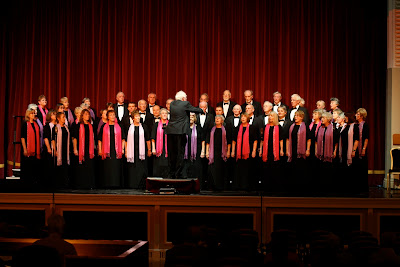 Keighley Vocal Union from West Yorkshire became the first holders of the title ‘Choir of the Festival’ when they won the inaugural event in the Villa Marina on Sunday afternoon.

Choir conductor Frank Smith received the Festival Trophy, and a cheque for £1,500, from Festival Patron Moira Anderson.  Keighley Vocal Union was selected for the final by adjudicator Alwyn Humphreys after winning the mixed choir section the previous day.  Other finalists were the Swift Singers from Essex, who won the ladies’ voice section, and Portadown Male Voice Choir from Northern Ireland.  Each group received a cheque for £500 as class winners.

Another big winner was the event itself.  Conductor of the Keighley choir, Mr.Smith, said afterwards that he had enjoyed the Festival which had been a great occasion.  He added: ‘It was a really tough decision for the organisers to launch something like this and I am really pleased for them that it has gone so well.’

The adjudicator, Mr. Humphreys, told the audience in the Royal Hall that he had enjoyed the Festival immensely.  He said he would leave with very happy memories of the Isle of Man and its people and was sure everyone would look back on the weekend as a time when they made new friends through music.

Presenting the awards, Moira Anderson paid tribute to Geoff Corkish MBE, MHK, member for Tourism, for not only conceiving the Festival idea but having the organisational flair to convert his dream into reality.

In turn, Mr.Corkish thanked his team for their hard work and organisation and also the choirs for their support.  Said Mr.Corkish: ‘We flung our bread upon the waters many months ago in the hope that choirs around the British Isles would join with us in the passion and enthusiasm we have in the Isle of Man for making music.  Thank you for returning that passion and enthusiasm.’

He went on to thank Alwyn Humphreys and Moira Anderson for their involvement in what he hoped would be a festival which would grow and grow.  He said it was right that it should be centred on the Isle of Man where they enjoyed singing so much.

Earlier, announcing the winners at the conclusion of the classes on Saturday afternoon, Mr.Humphreys described it as a really fantastic afternoon of music making.  He said he looked on it as a great honour to be asked to adjudicate at the first ever Festival of Choirs.

He added: ‘We have heard so many different sounds, a variety of music from different cultures and periods of history – all in a wonderful spirit.  The aims of this Festival are to celebrate friendship, harmony, and the love of music and that is exactly what we have had.’

Top local performance of the weekend came from Musicale (conductor Mrs Judy Cross) who picked up a cheque for £200, and a trophy, after coming second in the mixed voice choirs.  They finished only three marks behind the section winners, Keighley Vocal Union, who was to go on to claim the Choir of the Festival Trophy.

The Festival brought to the Island over 500 choristers and supporters. The organisers, Isle of Man Tourism, said that plans were already in hand for the 2011 event which is scheduled for September 23-25.  Many choirs said they would be returning. In addition, a number of representatives of off-island choirs attended the event to assess it with a view to bringing their choirs to future festivals.

After the welcome reception for the choirs on Friday night there was a pleasant surprise for pub-goers when some of the singers visited Douglas hostelries to give impromptu performances.