Fifteen months of hard work by volunteers at Manx National Heritage came to fruition on Monday 28 July with a special presentation to Venerable Andrew Brown, Archdeacon of Man and Vicar of St George’s Church.   Some of the volunteers associated with this project gathered to witness the presentation at the Manx Museum.

During the First World War the Vicar of St George’s, Canon R D Kermode, kept and updated handwritten notes about individual men from his parish away on active service.  He noted their current whereabouts, if known, as well as whether injured, killed or returned home. These fourteen files of notes have been transcribed by volunteers and the full content made available online as a topic on www.imuseum.im entitled ‘Canon Kermode’s First World War Biographies (St George’s Douglas)’.  For details of individuals click on the Related People tab.
A special printed copy of the content was compiled for the church itself.  The presentation to the Archdeacon was made by Margaret Rattigan on behalf of the volunteer team.  As well as being a volunteer transcriber, Margaret is a member of St George’s Church.  She found her grandfather’s biography in Canon Kermode’s files.  Also present were Connie Farrell, Alan Cooper, Wendy Thirkettle (MNH Archivist) and Jan Lowe. 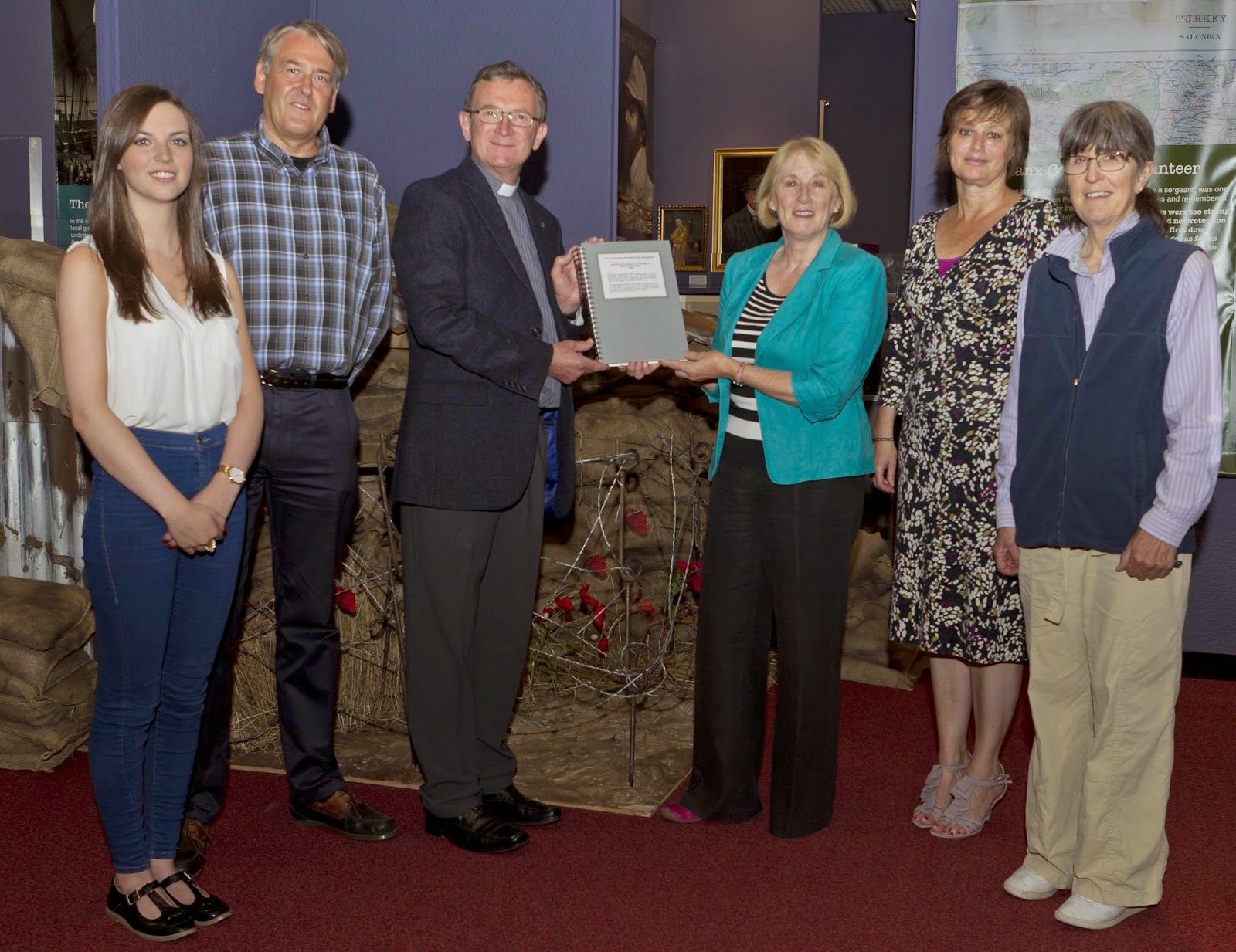 The gathering at the Manx Museum on Monday 28 July fell on the anniversary of the day in 1914 that the Austro-Hungarian Empire declared war on Serbia.   On 4 August Great Britain entered the conflict that became known as the Great War.  At a time when many commemorative events are being held on the Isle of Man, this contribution from a dedicated band of museum volunteers will have a part in the act of remembrance at a St George’s Church service on the afternoon of Sunday 3 August.  Thereafter, the volume will be available for remembrance and reflection in the church.
As well as holding many poignant stories of individual men and families caught up in the conflict, the notes reveal how men from one parish were scattered, posted many miles from home in different theatres of war.  St George’s was Robert Daniel Kermode’s home parish.  Many of the men were known to him personally, having connections to the church.   Among the 1,466 entries are notes about his postman and his nephew.
Some of the servicemen were old Sunday School boys or members of the St George’s Young Men’s (Barrack St) Club.  140 of the Club’s members enlisted voluntarily.  At the Club’s reopening in October 1919 Lt Governor Major General Fry unveiled a memorial in the clubroom to its 32 war dead.   A 1912 group portrait of Club members survives and is pictured here (MNH PG/383/1); it will shortly be available online via imuseum.im asa means of enhancing access to Manx archival source material for the First World War.
The original notes of Canon Kermode can be consulted in the Manx National Heritage Library and Archives at the Manx Museum (reference MS 10003).
ENDS
Image captions:
For more information: MNH Archivist Wendy Thirkettle, Wendy.Thirkettle@mnh.gov.im  01624 648041