Kelly McCarthy Posted on May 14, 2010 Posted in Uncategorized

Hey guys, this is a comment that someone who is insufferably smug and yet insufficiently confident to use their name left on the Chicago Manx post:
Perhaps someone could lead a campaign to have the Manx Flag flown the right way up. The way it’s shown in this photo implies that the Manx nation is in distress. I don’t think so.
Well, I don’t know who the “someone” would be. Perhaps our superior poster might like to step up? But I think it’s very unfair to snipe in such a snide way at people whose Manx families emigrated three hundred years ago when there was little consensus on how the three legs would rotate. Even in my lifetime we had to bring the police hat badges in line with other government agencies. I’m posting some pictures to show how the census (as shown above) was only recently arrived at. I do find the notion that the Manx flag hung upside down should be a sign of distress laughable (although it is true) as how the hell can anyone work out up from down on such a design?  For the record, the representation of the triskell must be dextrogyrous (turning to the right). Not all flag manufacturers know this which is why so many are produced incorrectly.
Photos: The Laxey Wheel, the Maughold Cross, the Royal Chapel at St. John’s. 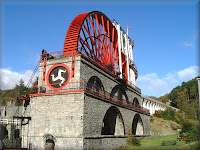 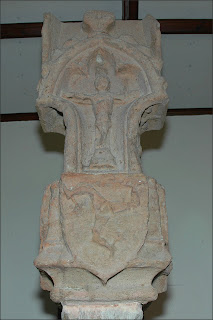 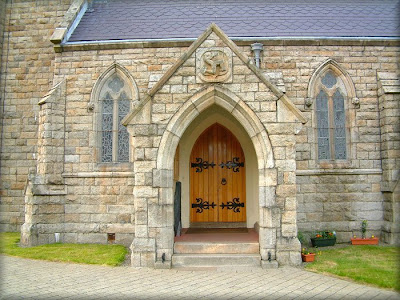 The Isle of Man flag has a red background with the Three Legs of Man emblem (Triskelion), in the center; the three legs are joined at the thigh and bent at the knee; in order to have the toes pointing clockwise on both sides of the flag, a two-sided emblem is used.
Check out here for Flag Protocol which is very similar to the US Flag Code.
http://www.flags-flags-flags.org.uk/isle-of-man-flag.htm