↓ Skip to Main Content
Home › Uncategorized › FORGET ABOUT REINDEER, IT’S ALL ABOUT DOLPHIN SPOTTING THIS CHRISTMAS

FORGET ABOUT REINDEER, IT’S ALL ABOUT DOLPHIN SPOTTING THIS CHRISTMAS 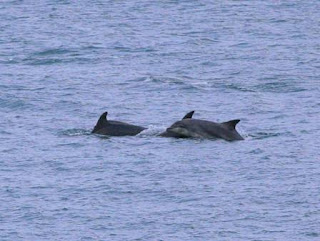 A rare sighting of between 100 and 150 bottlenose dolphins have been seen today in the waters off the south coast of the Isle of Man.
The dolphins were first reported by John Galpin of Manx Whale and Dolphin Watch at around 9:30am at Dalby, only roughly 100 to 200 metres offshore. The dolphins were sighted again an hour later on the north side of the Sound, which is situated on the southern tip of the Island. During this second sighting, the dolphins were split into four distinct groups numbering from 25 to 40 individuaaals, including juveniles and calves.

More information on the Isle of Man is available at www.visitisleofman.com or via the Facebook group http://www.facebook.com/VisitIsleofMan