There’s a splendid interview with Frank Kermode in The Guardian today. That’s Sir John Frank Kermode to you, the author, critic and razor sharp intellectual. He’s 90 and he’s a long way from Douglas where he was born.  If you are bright – read the interview. If you just want to know who he is, here’s the Wikipedia version: 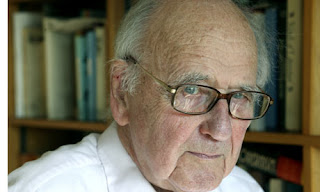 Sir Frank Kermode is known for many works of criticism; and also as editor of the popular Fontana Modern Masters series of introductions to individual modern thinkers. He is a regular contributor to the London Review of Books and The New York Review of Books.
Kermode was born on the Isle of Man, and was educated at Douglas High School and Liverpool University. He served in the Royal Navy during World War II, for six years in total, much of it in Iceland.
He subsequently pursued an academic career, becoming Lord Northcliffe Professor of Modern English Literature at University College London (1967-74). Under Kermode, the UCL English Department chaired a series of graduate seminars which broke new ground by introducing for the first time contemporary French critical theory to Britain.
In 1974, Kermode took the position of King Edward VII Professor of English Literature at Cambridge University. He resigned the post in 1982, at least in part because of the acrimonious tenure debate surrounding Colin MacCabe. He then moved to Columbia University, where he is now Julian Clarence Levi Professor Emeritus in the Humanities.
From 1975-1976 Kermode was the Norton professor at Harvard University.
He was knighted in 1991.