Galician Musicians in Concert at the Centenary Centre in Peel

If you’ve never heard the unique sound of the Galician bagpipe, there’s an opportunity to hear the gifted musician Anxo Lorenzo play live at the Centenary Centre in Peel at 8.00pm on Saturday 27 June.

A ubiquitous instrument, found throughout Europe and as far afield as North Africa and the Persian Gulf, it becomes a powerful tool in the hands of the talented Galician, who hails from the municipality of Moaña on the Atlantic coast.
It’s a region with close and indisputable links with the Celtic world, although the nimble-fingered Anxo Lorenzo freely skips across borders and genres with his musical interpretation. He’s unafraid of collaboration, and relishes fusing the traditional sound of the rich Galician bagpipe with such styles as jazz, electronic, pop, rock or flamenco. 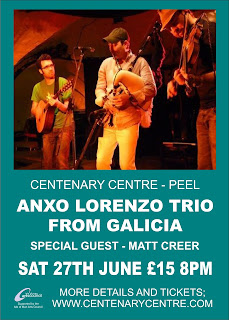 The Galician bagpipe is known as a gaita, and it’s suggested that the word is most likely derived from the Gothicword gait or gata, meaning “goat”; an appropriate description, once you understand the bag of a gaita is made from a whole, case-skinned goat hide.
Anxo Lorenzo will be accompanied by other members of his trio, Irish guitarist Eoghan Neff and Galician fiddle player Jesus Enrique Cuadrado.
Support on the night will be provided by the well-known Manx singer songwriter Matt Creer. Merging folk tradition, with warm, rich layered arrangements, and inspired by his classical background, Matt has created a sound all of his own; powering his latest album The Leeward Tide to  number seventeen in the iTunes singer songwriter chart on its first day of release. Tickets priced at just £15 are available from Celtic Gold, Peter Norris Music, Shakti Man, Thompson Travel, or from the Centenary Centre website.
www.centenarycentre.com