Get Your Festive Celebrations Underway with Manannan’s Winterfest! 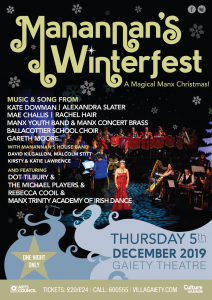 With the festive season on the horizon and the uplifting sound of music and song to warm our winter evenings, there’s an opportunity to enjoy a magical, Manx Christmas at the Gaiety Theatre in Douglas.

Manannan’s Winterfest, which made a successful debut at the same venue last year, will showcase a range of talent from across the Island (and one or two from further afield) who will represent a cross-section of top performers from a number of genres.

To be hosted by the one and only Dot Tilbury, the evening will feature the London based Manx opera singer Kate Dowman (who will be performing at Buckingham Palace on the previous day) and local girl Mae Challis – hot foot from a five-week recording session in London.

It’s an opportunity to celebrate Manx Christmas traditions with some of the Island’s finest exponents of classical, folk, brass and choral music, with a little added local humour and drama. This will include the outstanding young singer and actress Alexandra Slater, the award-winning Scottish harpist Rachel Hair and the legendary Michael Players RBV, who will entertain the audience with a rare Manx dialect play.