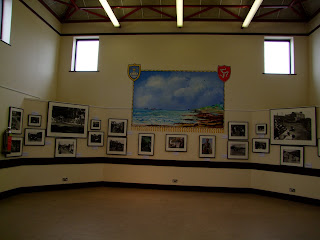 A superb exhibition of 50 photos of the TT selected from the Getty Images Archive, initially on display in London, are currently on show at the Civic Centre in Castletown, drawing both visitors and residents to the ancient capital. 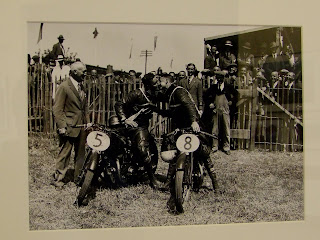 Mainly nostalgic black and white shots from the early years, this stunning archive captures the halcyon days of the TT when the emphasis on safety was more relaxed, smokers were in the majority and both officials and spectators dressed smartly in suits and ties. There’s clearly a more relaxed attitude contained within these evocative images of yesteryear, before commercialisation took full advantage of the world famous TT races.
Commentator Murray Walker said, “In my view the TT races are the greatest motorsport event in the world. The races have been an enormous part of my life from when my father raced in the 1930s through to the period when I commentated for the BBC. This exhibition brings back many incredible memories”. 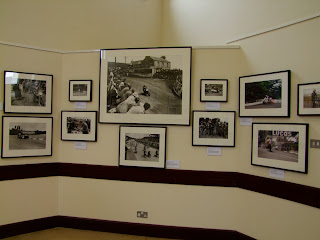 The exhibition presents a time capsule of historical moments, reawakening past names such as Stanley Woods, Harold Daniell, Freddie Frith, Artie Bell and Geoff Duke. But scattered amongst them are colour shots of more recent challengers like Guy Martin, John McGuinness, Steve Hislop, Joey Dunlop and David Jefferies.
Accompanying the images from the Getty Archive is a selection of photos celebrating over 50 years of racing at the Southern 100 meeting on the Billown Circuit. 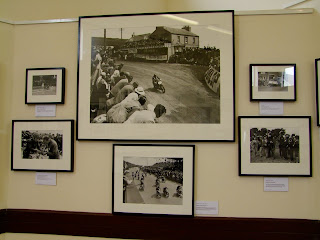 But there’s one photo that held my curiosity. It was taken in the winners’ enclosure at the close of the 1930 Junior TT and showed third placed man Graham Walker (father of Murray Walker) congratulating the winner Henry Tyrrell-Smith. A crowd of spectators stood behind them are clearly delighted with their success, but standing amongst the cheering supporters is somebody who looks remarkably like George Formby who went on to play the character George Shuttleworth in the film ‘No Limit’ made in 1935, and was a regular visitor to the TT races.
Valerie Caine © June 2011