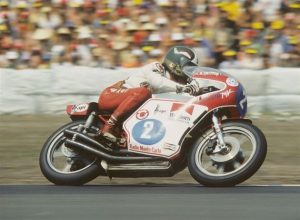 Isle of Man, – August 24-25-26 – For the 7th consecutive year, Team Obsolete has been invited back to the Isle of Man Classic TT, this time to display and parade two genuine exotic bikes from its world renowned collection: the 1976 Agostini MV Agusta 350/4 and the 1959 Surtees AJS Special.

Ten-time TT winner, fifteen-time FIM world champion, Giacomo Agostini will be riding the MV Agusta 1972/76 350 cc 4 cylinder Assen winner at the Jurby Festival and will be participating in a Special Lap of Honour on the fabled 37 mile “Mountain Circuit.” This is the same bike that he rode to victory in his last 350 Grand Prix, Assen 1976. (see article here.)

In addition to Giacomo Agostini, Classic Racing Legend, Dave Roper, the first American to win a TT will be riding the 1959 Surtees AJS Special which was recently honored at the ASI MotoShow in Varano, Italy. The “Surtees” had a long and distinguished career in ARTER EQUIPPE. Riders Mike Duff and Peter Williams scored many high placings just behind the Italian Multis. Williams was second behind Agostini’s MV 350/3 at the 1966 Isle of Man “Junior” TT.

Team Owner, Rob Iannucci said, “We are thrilled to return these great riders and bikes to the Isle of Man, the world’s greatest race circuit.”

Many thanks to our sponsors: AVON Tyres, Vanson Leathers, and Red Line Synthetic Oil.