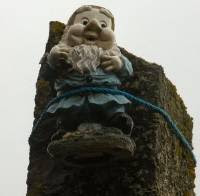 THIS gnome is a long way from home! Perched on a gatepost near the Gooseneck, he was one of several spotted by motorists driving on the Mountain Road in recent weeks.

Ramsey Police said they had no idea where the gnomes had wandered off from.

Whilst Bernard has not been very well of late this has raised a smile. Could it be Happy or have the Constabulary failed to make an identification. Maybe specialist help is being flown in from the Gnome Office even. If no progress is made on the case things could begin to look Grimm.
BERNARD MONTGOMERY WILBERFORCE, UK

Presumably they are in Gno-mans land
HAPPY

It is probably the work of the GLA (Gnome Liberation Army). They were very active on the big island until a few years ago. They rescue gnomes from gardens during the night and set them free in the forest. They are not native to the Isle of Man and the Ferrish do not want them and tie them to posts so that they can be recaptured
GRW