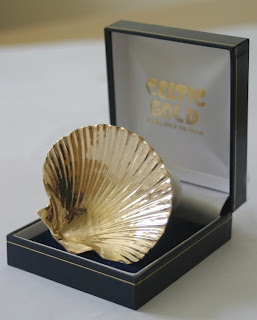 At 3.30pm on Sunday, after hours of frantic digging on Mortuary Beach in Port Erin, she unearthed a queenie scallop shell painted gold with a code and a mobile telephone number in a Tupperware box.
Her determination to find the queenie, worth £4,000, could not have been greater. Sarah, 42, now known as ‘Golden Brown’, knew 10 days ago that it was somewhere on Mortuary Beach.
‘I have been on the same beach digging, I must have done 40 hours,’ she revealed.
The Golden Queenie Conundrum was launched as part of this year’s Queenie Festival, which began in late June and ran into this month. A number of clues were issued to help hunters find their way to the golden prize. As clue after clue was issued and no queenie unearthed, it became clear it was going to take someone with great tenacity to find it.
Organiser of the queenie festival Tim Croft, of Island Seafare, said: ‘I’m glad it has been found and congratulations to Sarah, it is a fair reward for the long hours she put in. By all accounts she knew where it was but struggled to find out how many paces it was to the exact spot, but then she landed on it.’
He promised something similar for next year’s festival. ‘I do not know whether it will be a golden queenie, it might be something different.’
The Golden Queenie Conundrum was set by a local personality and the Golden Queenie itself was donated by Celtic Gold of Peel.