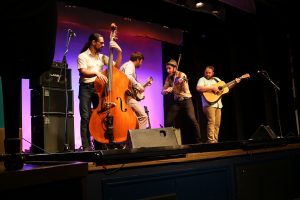 Hailing from Prince Edward Island, the smallest province of Canada, Gordie MacKeeman and His Rhythm Boys have just finished their latest UK tour and appeared for the second time at the Centenary Centre in Peel, where a packed auditorium tapped their feet in unison with the unmistakable vitality of fiddle player and dancer Gordie MacKeeman.

Gordie is known to one and all as ‘crazy legs’, which needs little explanation if you’ve seen the show, but there’s an unmistakable synergy between members of the band, the audience and their island status, which offers a familiarity to those who live on the Isle of Man.

Their performance draws favourably on each band member’s multi-instrumental capability, as they move effortlessly between various musical instruments with a long held, unflustered confidence, which reflects their ability to work closely together as a unit in concert.

Happily slipping into other genres, it’s fair to say that they are recognised for traditional bluegrass and roots music in their live and exhilarating shows, which have drawn international attention and awards such as the Roots/Traditional Group Recording of the Year at the East Coast Music Awards and the Galaxie Supernova Award at the Ottawa Folk Festival.

The Rhythm Boys have also performed at the legendary Glastonbury Festival, The Woodford Folk Festival, WOMAD and Celtic Connections, as well as before enthusiastic audiences at sold-out venues, festivals and theatres across Canada, the United Kingdom, Ireland, Belgium, Malaysia and Australia.

Their crowd pleasing performance ended with an encore of the song The Craic was Ninety in the Isle of Man, written by Barney Rush and performed by many Irish singers and groups since the 1960s.