Great news for the TT – The funfair is back 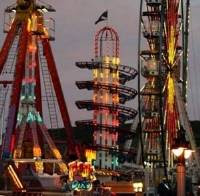 THE funfair – a regular feature on the Douglas promenades during the Isle of Man TT – is set to open today (Thursday). The government was forced to bring back the seafront entertainment after complaints about the lack of atmosphere when it was not featured last year. (Photo from 2008)

‘It’s great to see it back this year. It brings a great atmosphere to the prom and it’s good for both visitors and residents. The funfair has been a vital part of TT entertainment for many years and it was a mistake not to have it last year.’

There are two funfair zones, one providing the high-tech adrenaline rides and one with more traditional fairground rides for families. There are also catering zones and merchandising zones.’

The funfair will be open until Saturday, June 12.