↓ Skip to Main Content
Home › Uncategorized › Head for Peel this Weekend for Nautical Fun and a Carnival Atmosphere!

Head for Peel this Weekend for Nautical Fun and a Carnival Atmosphere!

The Peel Traditional Boat Weekend, now in its twenty fifth year, has become a nautical fixture on the Island’s event calendar and irresistible to the sailing fraternity, who return annually to sample Manx hospitality and get together with old friends.

Straddling the end of July and the beginning of August, it’s a great opportunity for members of the public to get up close to a variety of old style vessels and admire their skill and dexterity as they gather in the bay for a colourful Parade of Sail. 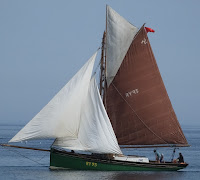 It’s a fairly relaxed weekend, following a similar pattern to previous years, which includes a range of entertainment along the quayside and the popular Quick and Dirty Boat Building Competition at the tongue, opposite Weatherglass Corner. Entry fee per team is £40 with application forms to be submitted no later than 29 July.
The merchandise hub and place of registration for boat owners will be at the Sailors’ Shelter on East Quay.
But on Sunday 2 August, the town will be enlivened by the colourful and boisterous Peel Carnival, bringing a lively atmosphere and exciting entertainment to the western port. 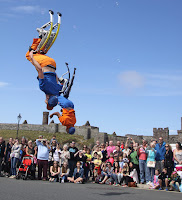 It’s a great community event which appeals to all members of the family, particularly the afternoon Grand Parade which attracts visitors from across the Island to watch a cross-section of performers, a myriad of walking tableaux and floats and a novel selection of vehicles gathered at the Manx Transport Museum; home to one of the unique P50s.
The Peel Carnival Committee is also keen to encourage anyone with a creative flair to take up the challenge of building their own floats for one of the many competitions on offer, or include something from an end of term school show. With over £1,000 in cash prizes on offer, there’s still time to get those creative juices flowing. Registration and judging will take place 1.00pm – 1.30pm outside the House of Manannan, with the Grand Parade departing at 2.00pm.

With a day of activities to look forward to, the Grand Parade will be complemented by a range of exciting street entertainers from the Isle of Man, the UK and Ireland, displaying an incredible range of acrobatics. This will include the popular Team Power Stilts guys who made their debut last year, and the musically talented members of the Panfire Steel Band from Manchester; a small band with a big sound!
For further details about the weekend’s events visit the Peel Traditional Boat Weekend website or Peel Carnival’s Facebook page.
www.peeltraditionalboat.org
Valerie Caine