Holy Days, a Hanging, Buried Treasure: All in a Manx Calendar!

Kelly McCarthy Posted on May 29, 2020 Posted in Culture Tagged with 1968, manx calendar 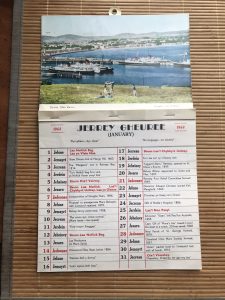 On Christmas Day, 1967, a Chicago couple named Harold and Helen received a special gift — a wall calendar from the Isle of Man filled with information about the Manx year, customs, and goings-on, with special mention of Manx holidays and sayings in the Manx language, Gaelg.

This little calendar passed into the collection of Bob Kelly, and then into the hands of the North American Manx Association. Fifty-two years later, Brad Prendergast of Chicago passed this bilingual Manx-English calendar, clouirit liorish Quine as Cubbon (printed by Quine and Cubbon) in Port Erin, on to me. Gura mie mooar ayd, Vrad (Many thanks, Brad)!

The calendar, compiled by Manx language activist Douglas C. Fargher and published by Yn Cheshaght Ghailckagh, may be slightly out of date, but 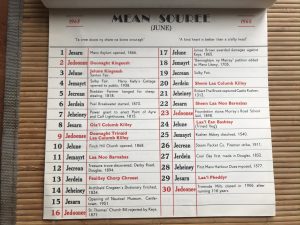 it contains a wealth of information about the Manx year just as valuable today as it was 53 years ago, reminders of history and traditions remembered and forgotten. And it ends with a two-page glossary of Manx Gaelic terms.

One important Manx term from the era: blaystan breneenagh, an atomic bomb.

I’d like to share some interesting moments from this Manx calendar. We’ll start with Mean Souree, the month of June (Mean Souree means “middle of summer,” by the way). Yo

u may not know that the Manx Asylum, according to the calendar, opened on June 1, 1866.

Right away we run into controversy: Other sources put the opening of Ballamona Hospital in Strang, Braddan, as taking place on June 2, 1868. Whatever the date, the asylum was a long-awaited and welcome Victorian addition to the healthcare facilities on the island.

n June 5, 1818, a Braddan farmer was hanged for sheep stealing. This must have been Robert Kewley, whose execution at the Claddagh, Castletown, was witnessed by 6,000 people — a large share of the Manx population then!

“The execution has excited a general and awful sensation — being nearly 40 years since anything of the kind occurred in this Island,” the Manks Advertiser reported. Earlier that year, Kewley stole a sheep from John Quiggin, of Ballayieree, according to the Manx Annals.

On a happier note, a “treasure trove” was discovered on the Derby Road, Douglas, on the 12th of June, 1894. The “Douglas Treasure Trove” was a collection of Old English (pre-Norman) coins and jewelry uncovered by workmen digging the foundation for a new house.

Those coins pre-dated by centuries the capture of Castle Rushen by Scottish King Robert the Bruce on June 21, 1313. The Bruce, who claimed the island for Scotland, arrived in Ramsey on May 18 and besieged Castle Rushen, defended by one Dungall Macdowyle, for three weeks.

June is also packed with holidays — holy days — starting with Doonaght Kingeesh and Jelune Kingeesh: Whit Sunday or Pentecost and Whit Monday, the first Sunday and Monday of the month. June 8 is Oie’l Columb Killey, the eve of the feast day of St. Colmcille or Columba.

Colmcille (d. 597) is one of the most famous Irish saints and the founder of the monastery of Iona in Scotland. Unfortunately, the annual Laa Columb Killey festival, held for more than 100 years in Arbory, Isle of Man, has been cancelled this year because of the coronavirus pandemic.

Other saint’s celebrated in June include Noo (Saint) Barnabas, Ean Bashtey (John the Baptist), and Peter, whose day, Laa’l Pheddyr, falls on the 29 of June. Doonaght Trianaid or Trinity Sunday fell on June 9 in 1968, and Feailley Chorp Chreest or Corpus Christi on June 13.

The calendar also starts each month in a Manx proverb. June’s is the memorable “Ta cree dooie ny share na kione croutagh.” That’s “A kind heart is better than a crafty head.” A good proverb for any month!