↓ Skip to Main Content
Home › Music › Holy Moly and the Crackers Lift the Roof of the Centenary Centre!

Holy Moly and the Crackers Lift the Roof of the Centenary Centre! 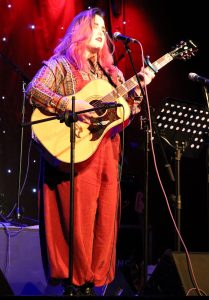 There was a feverish, expectant ripple amongst the audience at the Centenary Centre as they awaited the phenomenally talented band Holy Moly and the Crackers, but before this everyone was thoroughly entertained by local singer/songwriter Rhiannon Jade. Her soulful rendition of original compositions (except for a Bob Dylan piece) revealed a new name to watch in the future, with a powerful projection and excellent diction reverberating around the recently decorated entertainment centre, which fell silent in tribute to her undoubted talent.

Meanwhile, Holy Moly and the Crackers made their Manx debut at the Centenary Centre and were an instant hit with ticket holders, who found the urge to dance irresistible – and who can blame them!

Bringing a wild blend of folk and contemporary rock to the stage, their first visit to the Isle of Man was the start of a keenly anticipated European tour, treating everyone to a wide variety of musical influence and some powerful songs from their original repertoire. All of the band’s musicians revealed their own individual talents on the night, but special mention here for gifted fiddle player and vocalist Ruth Patterson. Their infectious enthusiasm all but lifted the roof off the old Methodist hall and inevitably prompted a well deserved standing ovation. 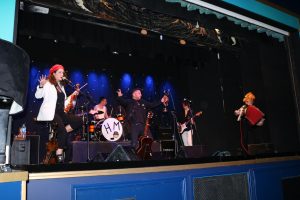 Also available during the evening was a bonus sale of just part of the extensive music collection of the late and much missed music promoter Jonno Gollow, bequeathed to the Centenary Centre. Funds from the sale will be put towards the cost of a new mixing desk and if you missed out on the night there’ll be further opportunity to purchase some great music at future events at the Centenary Centre.