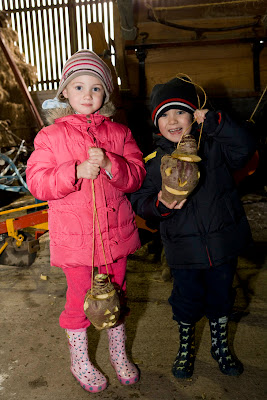 As the rest of the British Isles prepares to celebrate Halloween, the National Folk Museum at Cregneash will stage a traditional Manx Hop tu naa celebration starting at 10am on Saturday 31st October.

There will be a free turnip and candle with every ticket purchased during the week commencing 26th October and on Saturday 31st October children will be able to make and decorate their own turnip lanterns to take home, for Hop tu naa. There will also be a variety of children’s activities associated with the festive occasion.

Historically Hop tu naa has been considered to be the Celtic New Year, marking the end of the summer and the beginning of winter. It was traditionally a time when people would celebrate the fact that the harvest had been safely gathered in and all the preparations had been made for the long cold winter ahead.

Traditionally the boys would go from house to house singing the Hop tu naa song and hope to be rewarded with apples, bonnag, herring and if lucky given some sweets and the odd penny as well. The girls would stay at home and try to discover who they were going to marry. They hoped that by eating a salted herring or a soddag valloo (dumb cake) of flour, salt, eggs (shells and all!) and soot, they would dream of their future husband. Not all of these traditions have survived but many children still go out with a carved turnip lantern singing the Hop tu naa song around the streets.

Yvonne Cresswell, Curator of Social History commented: “The Hop tu naa event at Cregneash is an event for the whole family and a great opportunity for everyone to find out more about the customs and traditions of Manx Hop tu naa. Visitors will be able to make and decorate their own turnip lantern to take home and they will also be able to learn the Manx Hop tu naa song and dance.”

All the activities will take place under cover at the National Folk Museum at Cregneash, so visitors do not need to worry about the weather.

Everyone is welcome to come along and join in this customary celebration of our Manx heritage at The National Folk Museum at Cregneash from 10am to 5pm, standard admission fee applies. Please note that Manx National Heritage Seasonal Sites close on 31st October 2009 and reopen at Easter 2010 on 2nd April, however the Manx Museum and the House of Manannan remain open throughout the winter period.