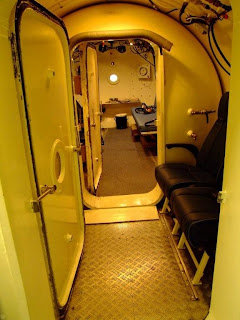 Based behind the Fire Station in Douglas the hyperbaric chamber helps to improve the lives of countless people with a variety of medical conditions, but a lack of funding has prompted potential closure of this much needed facility.

The offer of a hyperbaric chamber followed the death of Manxman Kevin Gray, a commercial diver in the Middle East, more than 25 years ago; had a chamber been available at the time it would have saved his life. Kevin’s employer donated the facility to the Isle of Man Government on the understanding it would be available to divers from around the Irish Sea area.  Previously casualties were flown to Northern Ireland for treatment, but now they could be treated inexpensively on the Island.

With the advancement of medical science it was acknowledged that the administration of pure oxygen could help other medical conditions successfully, and over a period of approximately six years the Manx based chamber completed a staggering 10,000 treatments in what was then a very small chamber.

Despite these achievements conditions for both patients and staff were far from ideal. Housed in a shipping container with only basic facilities they were visited by Bill Scholl seeking treatment in the chamber. Subsequently the Scholl Foundation provided the building we see today allowing improved working conditions and a more relaxed atmosphere for patients.  It was also time to replace the actual chamber and with the help of local Hyperbaricist David Downie we now have two chambers which are in constant use.

Although usually associated with divers suffering with decompression illness, the hyperbaric chamber can also help many other people struggling with a myriad of problems. It’s by no means a quick fix with a long term commitment necessary from patients, but the results are worth it. Currently patients attending the chamber here are not compelled to pay for their treatment, but if consistent, long term funding does not become available in the foreseeable future this policy may have to change.