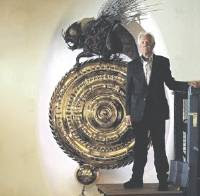 NEW time-keeping work of art created by a celebrated Isle of Man-based inventor and artist will be launched at the Masterpiece London fair this month. Dr John Taylor of Port Soderick will unveil The Midsummer Chronophage on Midsummer’s Day, June 24, in the English capital.

The chronophage, which means ‘time-eater’ in Greek, will probably be unrecognisable as a time-keeping device, as it is the first ever clock without hands or numbers.

Up until now all clocks have presented each minute as if it were exactly the same as the next, but Dr Taylor believes that collective human experience of time contradicts this.

Dr Taylor will ask visitors to reflect on the longest day of the year as they view his giant time-based work of art which offers a different way of showing time.

‘As we all know, some minutes, hours and days seem longer and shorter than others,’ he said.

‘The perceived duration of each minute varies from person to person and depends on circumstances. As you get older, you become more aware that time isn’t on your side and every minute that passes is gone forever. The Chronophage shows this quite graphically as it relentlessly devours each and every minute.’

The Midsummer Chronophage shows time in a way that reflects this experience. Some minutes race by, others drag, some disappear and others appear to stand still.

Every five minutes the clock corrects itself and accurate time is shown through light slits.

Moving over the 1.5 metre clockface is a large kinetic sculpture of a mythical beast. This beast, which is an integral part of the mechanics of the clock, appears to devour time.

The hour is tolled by the sound of a chain clanking into a small wooden coffin hidden in the back of the clock to remind people their time on earth is limited.

The clock is 3.3 metres high and is made of gold-plate, stainless steel and electro-mechanical components.

The piece, which took more than two years and over 100 artists, engineers, scientists, jewellers and calligraphers to make, really represents a fusion of art and technology.

Dr Taylor is an award-winning inventor who has a life-long fascination with the world of time-keeping. He holds hundreds of patents and has received four Queen’s Awards for Export and Innovation.

He was chairman of Manx company Strix, which pioneered thermostatic controls for kettles, now used all around the world.

The Midsummer Chronophage is the second in a series of chronophage creations by Dr Taylor. The first, The Corpus Clock, is installed at Corpus Christi College in Cambridge. It was inaugurated by top scientist Stephen Hawking.