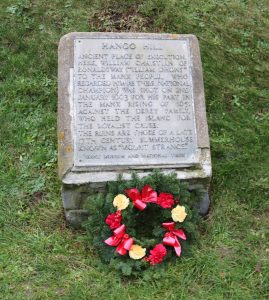 Onlookers gathered as usual on the 2nd January at the site known as Hango Hill, near Castletown, to commemorate the death of Illiam Dhone who was executed at this windswept location during the seventeenth century.

A landmark event on the Island’s calendar organised by Mec Vannin and the Celtic League (Mannin branch), proceedings got underway with speeches by Bernard Moffatt and Mark Kermode, both of whom referred to the sudden death of Manxman Roy Kennaugh. Fiercely proud of his homeland, he played an important part within several Island organisations, including Mec Vannin, the Celtic League, Michael Heritage Trust and the Celtic Congress, as well as a member of Michael Commissioners. 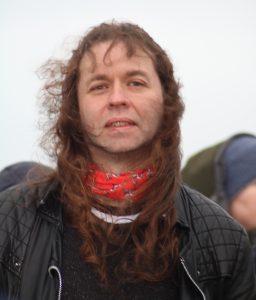 They were followed by the two main speakers at the event, Peter Crellin who gave the oration in Manx Gaelic on the subject of the Island as a ‘seat of Celticism’ and Dr John Callow who followed with the oration in English detailing his own interpretation of historical events from Illiam Dhone’s life.

Dr Callow is a well known writer, screenwriter and historian of Manx descent, whose teaching and research interests lie primarily in the fields of Early Modern British and European political, social and cultural history, (especially seventeenth century politics), witchcraft and popular culture. He has been the Director of the Marx Memorial Library, based in London, since 2006. 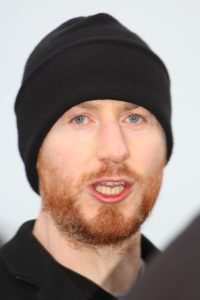 The commemoration concluded with a wreath laying by Eddie Power of Ballasalla at the base of Hango Hill before the crowd dispersed to either the church service at Malew Parish Church, or to The George in Castletown where a music session was soon underway.