Although the weather wasn’t conducive to an outdoor event, a number of hardy individuals gathered at the site known as Hango Hill on the 2 January to commemorate the execution of Manxman Illiam Dhone (brown-haired William) of nearby Ronaldsway.

In some quarters opinion is still divided as to whether Illiam Dhone was a patriot, or a traitor, but his death by firing squad (historians state either 1662 or 1663) for his part in the Manx Rising of 1651 against the Derby family, is firmly embedded in the history books and chronicles of the Isle of Man. 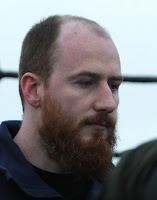 With the wind whipping through this exposed site opposite King William’s College, those assembled heard impassioned speeches from two members of the Manx Nationalist Party, Mec Vannin.

After a brief introduction by Bernard Moffatt, a speech in Manx Gaelic was given by Isla Callister. Her general message conveyed how she believed that the Isle of Man Government is in a unique position to use its degree of independence in such a way as to make real change, without looking elsewhere for inspiration. Following this, Peter Crellin spoke in English, reflecting upon Islanders frustration and concern about the Isle of Man Government’s actions and where they might lead us. 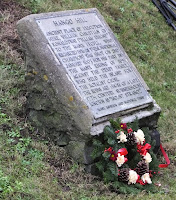 A wreath was laid at the site by Tom Callister before the event closed with the singing of the Manx National Anthem.
Those attending the commemoration then moved on to either the Castle Arms (aka The Glue Pot) in Castletown, where there was a thriving music session, or Malew Church, the site of Illiam Dhone’s burial, to participate in a special church service.

The ruins currently on the site of Hango Hill are those of a late seventeenth century castellated summer house built by the Derby family, also referred to as Mount Strange, in honour of the Derby heir Lord Strange.
Known as a place of execution and possible prehistoric burial site, the name of Hango Hill is said to be derived from the Norse description ‘hanga-haugr’ (Gallows Hill), although others say it originates from the Norse word ‘hengi’, meaning a jutting or overhang.  It’s also reputedly haunted by a headless black dog; seen chiefly by fellow canines.

Further details regarding this year’s commemoration can be found on MTTV at www.isleofman.com.