Kelly McCarthy Posted on October 26, 2011 Posted in Uncategorized
Everyone was having a hen when I was over recently because of building work alongside Rocklands above the catwalk in PSM. The diggings were chucking dirt and stone back onto the rocks below and people were fearful for their foundations as far across as the west side of the High Street. So, this is very interesting and will change a view that’s looked the same for  a long time.


A CONTROVERSIAL plan to build two houses on the Underway in Port St Mary has heen approved by the Department of Infrastructure. IOMToday
John Shimmin MHK, deputising for the minister on planning matters, accepted the recommendation of independent planning inspector Stephen Amos to approve the plan.
The plan (10/01892/B by Len Chatel) for two houses with integrated garages and visitor parking in land in front of Bay View Hotel, between Shore Road and High Street, provoked outrage among the local authority and residents when it was first passed.
Objections include the geology of the rock face (in an area that suffered a collapse of the highway in the 1980s, leading to closure of the road and severe disruption), the risk of flooding and building on a green stretch.
A previous plan (09/1295/B) was passed earlier this year and, at the time, the local authority said it was ‘stunned’ by the decision. Eddie Teare MHK, who was deputising for then Infrastructure Minister Phil Gawne MHK on planning decisions, said that the plan raised issues relating to car parking and recommended another plan be submitted, leading to this latest plan, approved in May.
Mr Amos took the appeal decision of the first plan (09/1295/B) as his starting point for this latest planning appeal.
He said the current planning appeal was ‘essentially the same as the previous appeal scheme, save that it includes details of the parking area.
As a result, there are a range of matters on which conclusions were reached in the previous appeal which it would be inappropriate to reconsider unless there is relevant new evidence.’
He considered whether there was any new evidence.
Regarding whether the applicant owned the land in the car parking element of the plan, Mr Amos felt if ownership was ‘false’ any planning approval might be invalidated.
Relating to planning policy, the visual and amenity impact of the proposal, land stability, flooding issues and satisfactory vehicle access and car parking, he agreed with the findings of the previous planning inspector.
The only new details related to the parking area, and this would be ‘neatly kerbed and surfaced, with a well-designed, relatively low and angled containment to the seaward side’.
The visual harm would not be significant enough to justify refusal, he said and added that the existing shingle with rough vegetation was ‘not a particularly attractive feature’.
There was no evidence, he concluded, that the parking spaces would ‘significantly interfere with the dynamics of the beach, such as to increase or transfer risks of coastal flooding or erosion’, said Mr Amos. 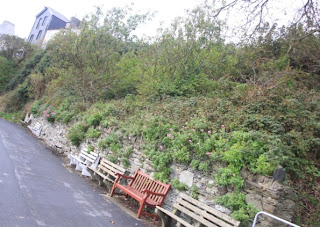 He recommended that the appeals should be dismissed and approval be granted.