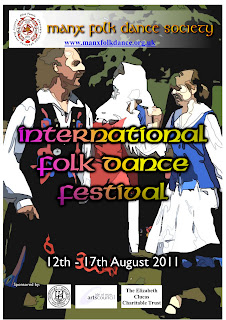 The Manx Folk Dance Society will be celebrating 60 years of dancing later this month by staging a special international folk dance festival, with public events across the length and breadth of the Island for everyone to enjoy.
Prominent at many Island events the Manx Folk Dance Society was formed in 1951 for the Festival of Mann celebrations, and although there is no definitive traditional Manx costume the group has adopted a number of distinctive and colourful designs over the years, which members use during performances both on and off the Island. Their continuing popularity has played a major role in preserving Manx dancing as they pass on their knowledge to subsequent generations, but their unabated enthusiasm has now spilled over into the production of books, records, cassettes and videos. They are currently working on a DVD of Manx dances which they hope will be completed by next year.
Generously supported by the Manx Heritage Foundation, the Isle of Man Arts Council and the Elizabeth Clucas Trust, the festival promises to be a colourful exhibition of costume and dance with a multi-cultural line-up of groups from England, Germany, Sweden, Wales and the Isle of Man. Many of the dances date back over centuries, expressing individual traits as diverse as daily chores in Sweden, or the fertility of crops in England, with their costumes replicated through the study of historical drawings and patterns to identify some of the key features of each country.
Members of the Manx Folk Dance Society have represented the Island at many international events over the years, and in turn have hosted visiting groups from which they have made their selection. There will be a cross section of talent treading the boards during this unique festival which has been many years in gestation and will culminate in a gala performance at the Royal Hall in the Villa Marina.
Despite a hectic schedule members of the visiting groups will also have the opportunity to explore the Island and meet up with old friends.
In addition an open invitation has been extended to members of the Manx Folk Dance Society, both past and present, to celebrate the group’s 60th anniversary on the 7th September, 2011, at the Hydro Hotel, Douglas. If you would like further details please contact Freda Black by phoning 624858.
Programme of Events
12th August 2011
Parade and opening ceremony in Castletown Centre 7.30pm – 10.00pm with short dance displays.
13th August 2011
Concert at the Villa Marina with all groups in the Royal Hall at 7.30pm
£10 (adults) £7.50 (children) tickets available from the  Box Office at the Villa Marina and the Welcome Centre
14th August 2011
Dance performances in Castle Rushen 1.20pm – 2.30pm and 3.30pm – 4.40pm.
Dance performances at the Quarterdeck on Port Erin Promenade 1.30pm – 2.50pm and 3.10pm – 4.30pm.
15th August 2011
Dance performances in the Mooragh Park, Ramsey, 11.00am – 12.40pm and 2.20pm – 4.00pm.
Dance performances on the forecourt of the House of Manannan, Peel 10.45am – 12.30pm and 2.30pm – 4.15pm
www.manxfolkdance.org.uk
Valerie Caine © August 2011