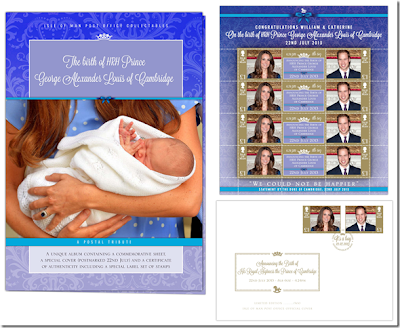 Isle of Man Stamps have given the new royal baby their stamp of approval by issuing a selection of memorabilia in celebration of the birth of HRH Prince George Alexander Louis of Cambridge who is third in line to the British throne.
It’s hoped that royal family enthusiasts will be attracted by a special limited edition package, containing a commemorative cover with a gold foil postmark, a fully authenticated birth announcement card and a mint sheet of stamps priced at £25.
In addition there’s a silver-foiled commemorative envelope (£8.50) featuring stamps of the Duke and Duchess of Cambridge and details of the birth of their son. A special feature of this timely product is two unique postmarks bearing the words Royal Avenue and Windsor Road and a dedicated information card with a specially commissioned text by leading royal journalist and biographer Claudia Joseph.
The stamps and birth announcement are also available on a stand-alone sheet priced at £8.
A special commemorative cover will be forwarded to the Duke and Duchess at Kensington Palace as well as to the parents of four babies born on the Isle of Man on the same day as the royal birth.
Valerie Caine © July 2013