Kelly McCarthy Posted on May 20, 2013 Posted in Uncategorized
The Three Legs of Man – a triskelion
The distinctive triskelion is inevitably, although not exclusively, identified with the Isle of Man, but is recognised worldwide as a badge of identity throughout the Island’s sometimes turbulent history.
It’s a powerful symbol linked to a rotary movement which is seen as representing the three-spoked wheel of the sun god’s chariot as it crossed the sky. 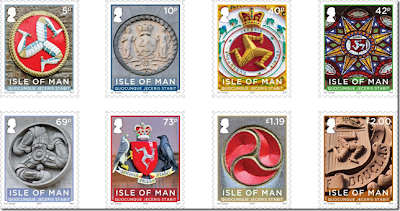 Locally this evocative image appears in a number of guises, but not always the correct way round, nevertheless, Manx people are justly proud of their distinctive emblem, although when first in use on the Island remains un-established. Sir William Scrope (a former King of Man) used a strikingly similar example when sealing and signing a treaty between England and France in 1396, but it’s most notably connected to the Manx Sword of State which may date back to 1422.
The Latin motto, Quocunque Jeceris Stabit, which accompanies the symbol, has also been subject to change, although its core meaning (we’ll survive whatever happens) remains constant. The motto itself originally featured on the family badge of the Byzantine/Roman General Flavius Belisarius (505 – 565 AD) along with a representation of a caltrop (a ball fitted with four spikes) which, no matter where it fell would always prove injurious to any beast following in battle. It’s assumed that someone remembered this and resurrected this timeless phrase for the Isle of Man.
Little did they know how popular this powerful combination would become centuries later as both an identification marker and as a veritable gift to the tourism industry.
Valerie Caine
© May 2013