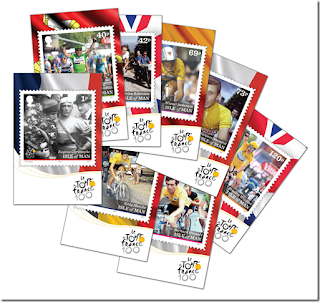 With the Island’s profile now more prominent than ever in the world of cycling, it’s appropriate that the Isle of Man Post Office should celebrate the 100th edition of the celebrated Tour de France.
This particular stamp issue sets out to honour its greatest champions, whilst emphasising the role played by both Britain and the Isle of Man in what is considered, by some, to be the world’s biggest annual sporting event.
And it’s also an opportunity to put on record how, for more than 50 years, Isle of Man International Cycling Week attracted many competitors from the Tour de France.
Started in 1903, but now known as Le Tour, it wasn’t until 1937 that Britain participated, and it was a further 21 years before Yorkshire born Brian Robinson won a stage of the race. He has played a key role in bringing the tour to his country for the Grand Départ in 2014 and is featured on one of the Manx stamps.
Valerie Caine