Island at War Event on the Steam Railway

For those with an interest in World War II, this weekend’s special 1940s event on the Island’s vintage steam railway should be just the ticket.

Advertised as a family-friendly event, it’s a chance to relive the nostalgia of 1940s wartime with the Isle of Man Steam Railway’s fifth Island at War weekend.
A number of events will take place at three of the main railway stations, bringing history to life at Douglas, Castletown and Port Erin.

Passengers travelling on the train from Douglas to Port Erin will also have the opportunity of seeing a Spitfire crash site, guarded by  an artillery vehicle en-route, which can only be seen if you travel by train.
Douglas Station will be transformed on both days into an active military outpost, which will include a variety of entertainment, vintage cars, military vehicles and cameo re-enactments.
New for this year is the ‘Hair-raid Shelter’, where you can pop in for a quick 1940s hair make-over before catching the train. 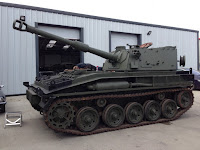 Meanwhile, Castletown Station will become a wartime camp, where ‘casualties’ will be brought in by train for the nearby field hospital.
There will be entertainment on the trains for children, with refreshments sold to passengers from the platform as in former days. 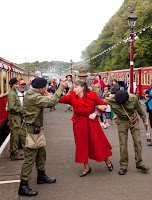 At Port Erin Station there will be a selection of exhibitions, entertainment, vintage cars and a 1944 Morris C9B self-propelled Bofors Gun, with an opportunity to buy crafts and cakes from the WI.
Highlights of the weekend will be a special Manx veterans’ train from Douglas to Port Erin and the popular singing trio the D-Day Darlings.
Away from the hustle and bustle of the railway stations, there’s a chance to explore what life was like for the Island’s rural community during World War II at Cregneash.
There will be harvesting and agricultural displays, demonstrations by the Isle of Man Home Guard and Women’s Land Army, and an opportunity to hear about some of the human interest stories from World War II in a guided tour.

In addition, there will be a guided walk to explore the history of the World War II radar stations at the nearby Meayll Hill, led by Dr Andrew Foxon; advance booking recommended.
For further details visit www.iombusandrail.info.
Valerie Caine