Island on lookout for giant pumpkin 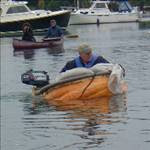 A former soldier from Wales is hoping to raise thousands of pounds for an ex-serviceman’s charity by sailing a giant pumpkin to the Isle of Man.
Alwyn Williams of Anglesey served in Afghanistan and says he wants to raise the cash for colleagues who were injured or lost their lives.
He works for his father Medwyn Williams, ten times gold medal winner at the Chelsea Flower Show, so he’s no stranger to the massive veggies.

Manx Radio has an interview.