Islanders Remember the Sinking of the Lusitania and its Manx Connections

Valerie Caine Posted on May 5, 2015 Posted in Uncategorized 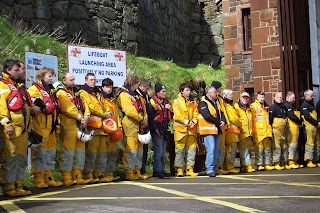 In commemoration of the sinking of the Lusitania and its Manx links, a special Memorial Service was organised by Peel Commissioners during the May bank holiday weekend, together with a number of other events to reflect on the tragic episode which is historically linked to the Island.

In spite of the atrocious weather conditions, the clouds parted during the Memorial Service held at the RNLI station in Peel, where a number of local dignitaries gathered for the occasion, including His Excellency the Lieutenant Governor Adam Wood, Chief Minister Alan Bell MHK, Madam President Clare Christian, the Right Reverend Robert Paterson (the Bishop of Sodor and Mann), the Dean of St German’s Cathedral, Nigel Godfrey, and representatives of Peel Commissioners. 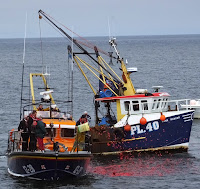 They were joined by choristers from the cathedral, representatives of military organisations and the crew of the local lifeboat, to hear extracts of the original story and readings and take part in hymns and prayers. This included Eternal Father, Strong to Save written by William Whiting (traditionally associated with seafarers) and the Manx Fishermen’s Evening Hymn by W. H. Gill. 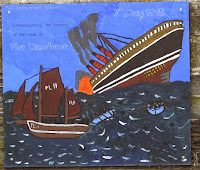 The short service concluded with the Manx National Anthem.

Following this a number of invited guests, along with Jackie O’Halloran of the Lusitania Memorial Committee, boarded the local lifeboat together with members of the crew before heading out towards the back of Peel breakwater. They were joined by a small number of local vessels as the Lieutenant Governor and the Chief Minister cast wreaths on the water and thousands of biodegradable poppies were strewn in memory of those who died.
Later in the afternoon a free lecture delivered at the Centenary Centre by Tony Pass, (Chairman of Manx National Heritage) covering the stories of the Lusitania, the Manx fishing boat Wanderer, (whose crew played a vital role in the rescue), and the U-boat which torpedoed the Cunard liner, attracted a full house to the entertainment venue. 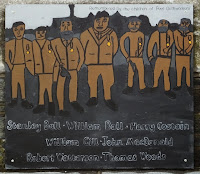 A number of passengers and crew sailing on the Lusitania, some of whom did not survive, were also from the Isle of Man.
In conclusion, a celebration of life, with music by The Shenanigans Banned and an evening meal, brought proceedings to a close at the marquee on the former swimming pool site on Marine Parade in Peel, the home port of the Wanderer.

Local brewers, Bushy’s Brewery, prepared a special brew named the Wanderer for the occasion and funds after expenses were donated to the Peel based RNLI.