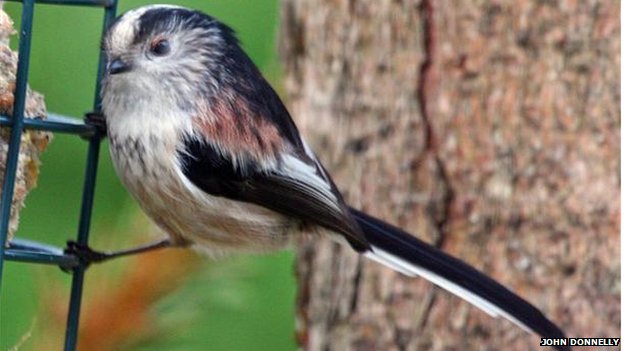 Long-tailed Tits were reported across island with many visiting bird feeding stations
Continue reading the main story
Bird watchers in the Isle of Man recorded sightings of more than 100 bird species during a week-long competition run by Manx BirdLife.
In total 110 different species were spotted between Christmas Day and New Year’s Eve on the island, seven more than 2011.
Spokesman Mark Fitzpatrick said: “The results show the fantastic richness of birdlife of the Isle of Man”.
Ten species were spotted which were not seen in the previous year.
According to Manx Birdlife the species seen in 2012 but not in 2011 were the Black Swan, Barnacle Goose, Long-tailed Duck, Red Grouse, Jack Snipe, Woodcock, Kingfisher, Waxwing, Chiffchaff and Brambling.
Just three species were seen in 2011 but not in 2012. These were the Shoveler, Great Crested Grebe and Yellowhammer.
The bird conservation charity invented the competition to encourage people to celebrate the island’s rich bird life.
Mr Fitzpatrick said: “We had a great response from the public – it wasn’t just the keen bird watchers, but also many people who reported what was visiting bird feeders in their gardens.
“Hopefully this will be an annual event and over time we will be able to continue to develop our understanding.”
The full list of species recorded during the Christmas Bird Race can be viewed on the Manx BirdLife website.