Kelly McCarthy Posted on January 5, 2012 Posted in Uncategorized
An inventor from the Isle of Man has been awarded a Fellowship of the Royal Engineering Academy.
Dr John Taylor OBE was honoured for his outstanding contribution to the advancement of British engineering, innovation and commerce. 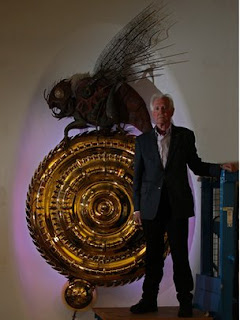 The 75-year-old from Santon designed and built the The Midsummer Chronophage valued at £2m, which was recently on display at the Saatchi Gallery.
Dr Taylor said he was proud to be numbered amongst highly regarded peers.
Educated at King William’s College and then at Corpus Christi College in the University of Cambridge where he read Natural Sciences, Dr Taylor moved to the Isle of Man in 1977.
He joined Strix LTD and later became famous for inventing the thermostat for the electric kettle.
After his retirement in 1977 he turned his attention to horology and in 2008 the Chronophage clock concept was unveiled by Professor Steven Hawking on the exterior of the Taylor Library of Corpus Christi College facing King’s College Chapel.
Standing more than 3m high the clock was made as a tribute to the great English clockmaker John Harrison who solved the problem of longitude in the 18th Century.
Harrison also invented the grasshopper escapement – a tiny internal device that releases a clock’s gears at each swing of its pendulum.
The inventor intends to make more clocks, all of which, it is hoped, will be engineered on the Isle of Man.