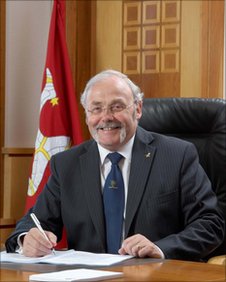 Continue reading the main story
The Isle of Man’s political system is more democratic than others because it is not dominated by party politics, according to the Chief Minister.
In an interview with BBC Radio 4’s Today programme, Tony Brown said the set-up meant politicians were directly answerable to the Manx public.
Mr Brown has served for 30 years in office as an independent member of the House of Keys.
He has announced he will not be standing in the 2011 General Election.
Mr Brown added that election candidates needed to engage with teenagers to encourage high voter numbers among 16 and 17 year olds.
The island is currently the only place in the British Isles to give the vote to this age group, which became law just before the general election in 2006.
Mr Brown said: “When we introduced the changes before the general election we saw a very positive uptake. We had a 58% turn out of those who actually registered.
“The big question at that age is why should I care, and can I actually make a difference? The candidates have to recognise these teenagers as part of society who are going to influence the election.”