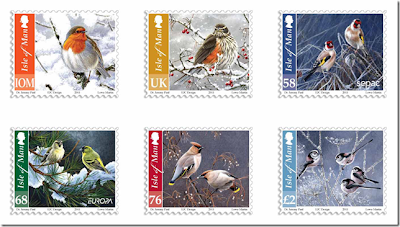 The latest release from Isle of Man Post features the work of Island based artist Jeremy Paul and encompasses the Europa theme of ‘Forests’ and the SEPAC theme of ‘Scenery’, in a strikingly visual presentation entitled ‘Birds in Winter’. 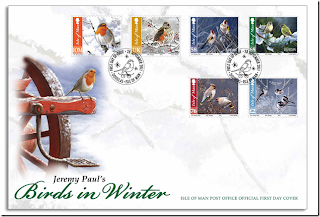 Some of the featured birds reside on the Island all year round, whilst others visit temporarily over the winter period. The easily identified Robin is a perennial favourite and has been selected for this issue along with the visiting Redwing, which flies into the Island in October to strip our bushes and trees of berries in their quest for survival. The dainty Goldfinch, however, has become a winter feature in many Manx gardens, easily recognised by his red and yellow plumage. In contrast the Siskin (one of the finch family) makes its home on the Isle of Man on a year-round basis, with the many conifer plantations scattered across the Island providing useful breeding sites and an increase in numbers. But the Waxwing is seen as a true winter visitor to the Island with its breeding grounds extending from north-eastern Scandinavia to west Siberia. A natural opportunist, these birds will travel in large numbers across to the British Isles in search of plentiful feeding grounds. The final stamp in this series shows a typical favourite of the winter garden scene highlighting the miniature Long-Tailed Tit. Their survival during the winter season relies on team work, body heat, good communication and the providence of Island householders.
Professional wildlife artist Jeremy Paul travels extensively in his work, but found inspiration for this series of stamps a little closer to home by studying birdlife on the Isle of Man during the heavy snowfall and extreme cold of recent winters.
Local charity ‘Manx Birdlife’, established in 1997 under the name of ‘Manx Bird Atlas’ also undertakes important work within this field, working with the Manx Wildlife Trust in relation to bird monitoring on the Calf of Man. They are also working closely with the Royal Society for the Protection of Birds with a view to developing plans for a wetland site in the north of the Island.
www.iomstamps.com
www.jeremypaulwildlifeartist.co.uk
www.manxbirdlife.im
Valerie Caine © September 2011