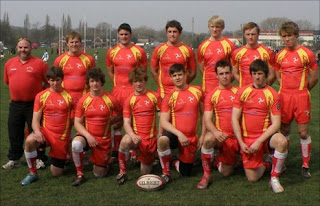 Twelve boys from the Isle of Man will realise their dream on Saturday September 10th, when they face Australia in the Rugby 7s at the Commonwealth Youth Games being held in the Isle of Man next week. This is their first ever international and they get to play one of the most successful rugger countries in the world.
The team have been working towards the Games for more than three years and Liam Murphy, 17, will captain the Isle of Man side throughout the competition.
The Manx team will also play Scotland and Canada in their group.
The second group will be contested by England, Trinidad and Tobago and South Africa.
The decision to enter a Manx team in the Games was taken back in 2006, by the Manx Rugby Football Union.

More at BBC on this story. More about the games at Isle of Man Youth Commonwealth Games 2011.