Isle of Man Stamps – A Celebration of Coronation Commemoratives 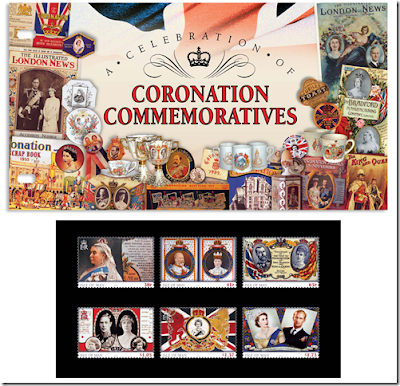 Commemorative souvenirs marking the coronation of British monarchs have long been popular with collectors, but with the diamond anniversary of Queen Elizabeth II’s coronation this year a whole range of new memorabilia will be available for the avid souvenir hunter during 1913.
But Isle of Man Stamps have already issued a new set of stamps to mark this royal occasion with the assistance of Alex Downie OBE MLC. A keen collector of coronation memorabilia for more than 40 years, some of his extensive collection is featured in this issue.
Despite its popularity the idea of a royal commemorative souvenir is a relatively recent trend, used for the first time to celebrate the coronation of Queen Victoria in 1838.
The thoughts behind what constitutes a souvenir have changed over time, ranging from simple, coloured postcards, models and flags in the early days to an extensive range of items for the coronation of Queen Elizabeth II.
It’s thought that the shortest-lived royal souvenir on the Isle of Man, however, was a replica of the St Edward’s coronation crown made with 1200lbs of confectionery rock to celebrate Queen Victoria’s diamond jubilee in 1897. Exhibited briefly by its maker, Johnson and Co., the Crown of Sugar as it became known, was smashed to pieces on the day of the jubilee and distributed amongst local school children who produced specially made tickets in exchange for five ounce bags of sweets.
www.iomstamps.com
Valerie Caine © February 2013