Valerie Caine Posted on April 3, 2014 Posted in Uncategorized
This new stamp release, in collaboration with Manx National Heritage and Lloyds Bank, marks the 150thanniversary of the birth of Manxman Archibald Knox and focuses on designs from his iconic work The Deer’s Cry. 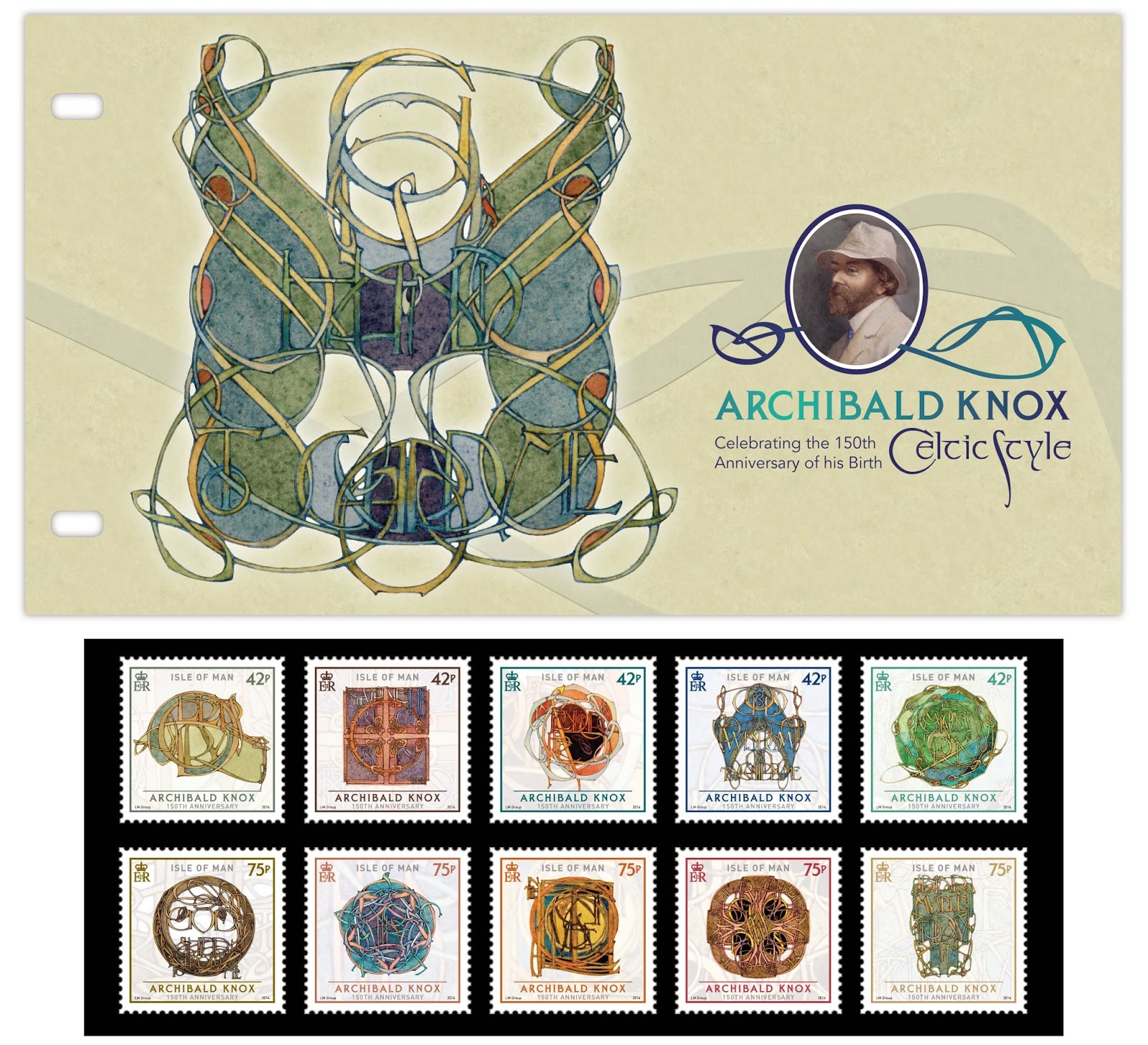 An internationally renowned artist and designer, who became a leading exponent of Celtic and Art Nouveau design at the beginning of the 20th century, his work remains popular amongst collectors.
Island Director of Lloyds Bank, Peter Reid, said, “Lloyds is delighted to be partnering Manx National Heritage in celebrating this milestone anniversary of one of the Island’s most famous artists. We are also extremely proud of our involvement in the sponsorship of the commemorative stamps. This year is very significant in terms of celebrating our culture and as one of the leading community banks it is important that we are involved”.
Recognised world wide for his unique style, Knox’s designs in silver and pewter for the celebrated Liberty and Co in London continue to attract the most attention, although on the Isle of Man he is also remembered for his water-colours, together with his designs and illustrations for Manx publications.
Chairman of the Manx Museum and National Trust, Tony Pass, commented, “The Deer’s Cry is undoubtedly one of Archibald Knox’s greatest masterpieces. It brings together many of the aspects of his artistic and personal life and of his Christian faith. The work illustrates his love of the early Manx crosses and th anniversary of Knox’s birth and during the Island of Culture 2014 celebrations, Manx National Heritage and Isle of Man Stamps, with the support of Lloyd’s Bank, are able to bring The Deer’s Cry to a wider audience”. 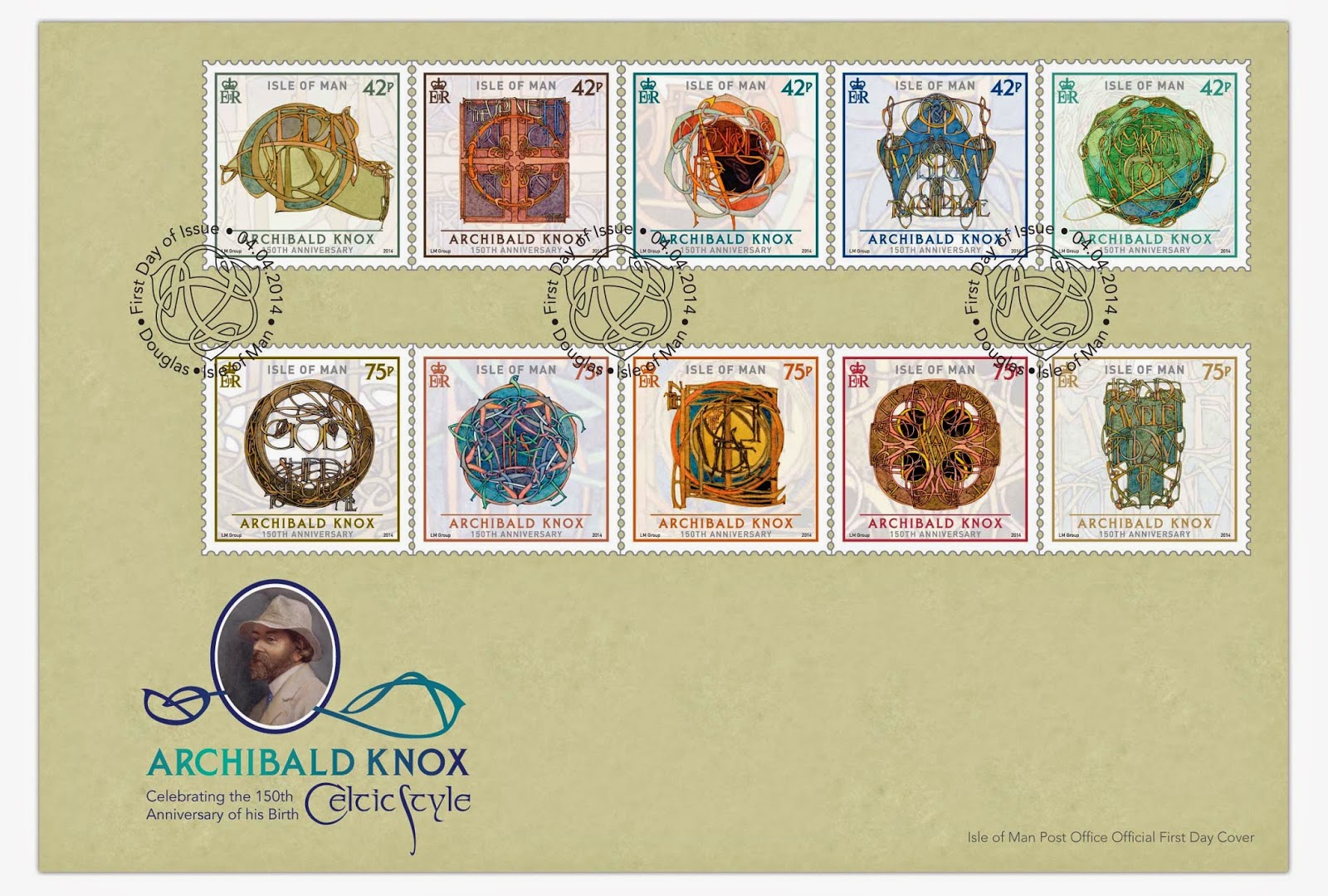 the Celtic and Viking heritage of the Isle of Man expressed in his distinctive interlace designs. His connection with the workshops of Liberty of London gave him a place in the Celtic/Arts and Crafts revivals. A century later his work is renowned across the world. I am pleased that in the 150

Knox’s life-long fascination with the distinctive Norse and Celtic crosses, found liberally across the Island, is displayed admirably within this commemorative stamp issue which also ties in with the opening of a new exhibition, Celtic Style, at the House of Manannan in Peel.
This set of ten commemorative stamps captures the vibrancy of the designer’s intricate interlace and calligraphy which characterised his work. The images used here originate from Knox’s celebrated manuscript The Deer’s Cry, which is based on an early Irish prayer. A masterpiece of lettering in water-colour, Knox started on this unique piece of artwork whilst working at the Knockaloe Internment Camp during World War I, and is widely acknowledged as his greatest achievement.
General Manager of Isle of Man Stamps and Coins, Maxine Cannon, said, “We are delighted with the stamps, they capture and frame the images from The Deer’s Cry. They are more than a fitting tribute to someone who helped provide the foundations of Manx art and bring it to an international stage. Knox’s legacy and influence continues to live on and the stamps capture an important part of cultural history that we are currently celebrating in 2014 with the Island of Culture”.
Valerie Caine
© April 2014