Isle of Man Stamps – Chinese Year of the Snake 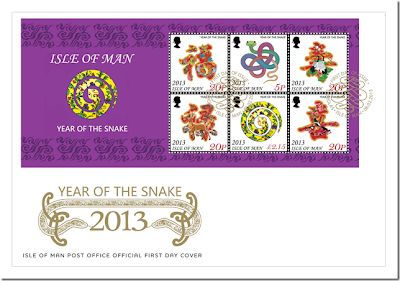 Today the Isle of Man Post Office release a miniature sheet of stamps in celebration of the Chinese Year of the Snake and the attendance of the Island postal service at the China International Collection Expo in Beijing later this year.
Recognised as the most important celebration on the Chinese calendar, it is also known as the Spring Festival and celebrates the start of new life and the season for ploughing and sowing.
2013 is the year of the black snake and is revered as the most enigmatic, intuitive, introspective, refined and collected of the signs of the zodiac. Chinese wisdom promotes that the snake is a good omen and predicts that your family will not starve.
Festivities begin on the first day of the lunar month and continue until the fifteenth when the moon is at its brightest, but before this Chinese people spring clean their houses to sweep away bad luck. It’s a time for families to gather over a traditional meal and on New Year’s Eve houses are decorated with paper scrolls bearing words of good luck and fireworks are set off at midnight to frighten away evil spirits. The colour red is a potent symbol at this time which is said to scare away any that may linger, with people dressing in new red clothes from head to toe and children waking on New Year’s Day to find a red envelope filled with money and sweets tucked under their pillows. Festivities close with a colourful and vibrant lantern festival with lanterns often hand-painted with scenes from history or legend.
Those born in the Year of the Snake are said to be thoughtful and wise and able to approach problems in a rational and logical manner, but seldom on instinct. Known for their complexity, they are clever, insightful and naturally intuitive, but express few words. However, they are stylish, fashionable and have exceptional taste.
David Cheung, owner of China Town on Douglas Promenade in Douglas, commented, “It’s a very special time. It’s the top celebration for family and friends being together and a time for many traditions such as spring cleaning before the New Year and picking a special flower to have in the house. This year my family and I will be celebrating the New Year in Hong Kong with close family. I very much like the new stamps, they are nice and colourful. I’m delighted to see the Chinese New Year recognised by the Isle of Man Post Office”.
Valerie Caine © February 2013