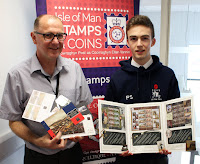 With the bicentennial celebrations for the Battle of Waterloo well underway, representatives from Isle of Man Stamps and Coins will be at the forefront of the trade stands accompanying the spectacular battle re-enactments in Belgium.

This unique event, now well underway, involves a staggering five thousand re-enactors, three hundred horses and one hundred canons, engaging in a four day commemoration.
General Manager at Isle of Man Stamps and Coins, Maxine Cannon, said, “We are delighted to have the opportunity to be represented at this historical event and showcase our Battle of Waterloo collectables, which enthusiasts can purchase at our stand as a keepsake of the bicentenary anniversary to take home with them.”
As well as the various battles, which eventually secured victory for Wellington, visitors to the site will have the opportunity to wander through the bivouacs and discover how life really was for the troops two hundred years ago.

Members of staff from Isle of Man Stamps and Coins will be on hand with the full range of the recently released anniversary collectables, including presentation packs, special folders, sets, sheets of stamps and special daily postmarks; capturing in striking detailed images of the battle from the preliminary strike at Quatre-Bras through to Wellington’s ultimate
success.

Pictured Andrew Wilkinson (Head of History) and Peter Smith (Y13 Head Boy of St Ninian’s High School) who took part in the Waterloo 200 Schools Programme and attended a national memorial service at St Paul’s Cathedral in London to mark the bicentenary, together with a teacher and pupil from Ballakermeen School.