Isle of Man Stamps & Coins – Commemorating the Battle of Britain

Isle of Man Post Office has teamed up with the Battle of Britain Memorial Trust to commemorate the 75th anniversary of the legendary battle with a special set of collectable memorabilia.

The Battle of Britain, which was fought in five phases, began in early July 1940, and during the coming months fifty four British squadrons of almost one thousand men took to the skies against the Luftwaffe’s extensive fleet of 1,220 long range bombers, 1,100 fighters and 400 dive bombers. Britain’s Fighter Command comprised four groups which protected the South- East of England, the Midlands and East Anglia.
Many hundreds of lives were lost and Britain’s defences were on the brink of collapse, but by early October 1940 they had managed to thwart the enemy’s attack.
Their triumph was based on a unique air defence system made up of a chain of radio direction finding sites (now known as Radar) positioned around the British coastline. Created by Air Marshal Sir Hugh Dowding, Commander in Chief of Britain’s Fighter Command, his system used a centralised control and reporting system. 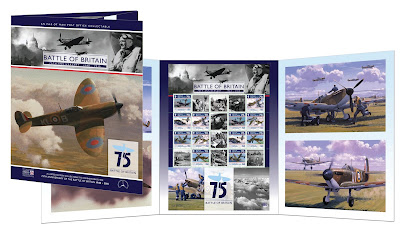 Meanwhile, the Island’s personal contribution towards the Battle of Britain was quite significant, with a higher percentage of its population deployed to military service than any other community in the British Isles during World War II.
This included the legendary RAF Group Captain Douglas Bader, who spent some of his early childhood on the Isle of Man. Despite being fitted with prosthetic legs after an air crash in 1931, Bader rejoined the RAF eight years later and went on to become one of its heroes.
During the final weeks of the Battle of Britain, the generosity of the Manx public financed the construction of two spitfires, aptly named North Barrule and Manxman; the latter used by Bader in his well documented attack of German aircraft during 1940 – 1941.
The special collection issued by the Isle of Man Post Office in commemoration of this event includes a cupro-nickel crown presented in a collector’s box, a sheet of twelve commemorative stamps and a special folder containing black and white photos highlighting events during the battle, and paintings from renowned aviation artist Kevin Woodcock, featuring aircraft from both German and British fleets.
Isle of Man Stamps and Coins General Manager, Maxine Cannon, said “The Battle of Britain could rightly be considered one of the most iconic battles fought in our history, a victory for Britain and the many brave soldiers that gave their lives in her defence. We are proud to mark this vital date in support of the Battle of Britain Memorial Trust in tribute to the brave work of ‘the few’.”
The Isle of Man Post Office currently displays commemorative plaques in remembrance of Manx postal workers killed in action during both world wars at its main branch in central Douglas, but they are set to be removed to postal headquarters on the outskirts of the capital.
Valerie Caine