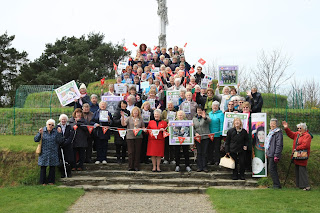 The Isle of Man Post Office has come up smelling of roses with the release of a special rose scented stamp to mark the centenary of the Isle of Man WI Federation.

This unusual set of six stamps depicts a selection of images, ranging from members of the current Isle of Man WI Chapter to some of the organisation’s most famous campaigns during the past hundred years.
Dympna Connolly, Isle of Man Federation of Women’s Institutes Board of Trustees member said, “I am delighted that the WI and its campaigns were chosen for the stamps. We have covered various topics in our campaigns from Equal Pay for Women, Fair Deals for Farmers and Keep Britain Tidy to Organ Donation.”
Each stamp is set on special rose scented paper, detailing the pink rose emblem which represents a century of contribution.
Established in Llanfairpwll on the island of Anglesey in 1915, the WI aimed to revitalise rural life, educating and inspiring women in their daily lives.
In recent times these aims have widened, but members primarily join with the idea of making new friends, to learn and develop skills and encourage positive change in both their local and national communities.
General Manager of Isle of Man Stamps and Coins, Maxine Cannon, said, “It’s hard to think of a cause over the last century that the WI haven’t directly influenced. Their energy and resolve is infectious and is quite clearly as strong as it has always been, and it’s for this reason we wanted to capture the WI of today by working with as many members and Institutes as possible on the stamp issue. It has been great fun compiling the issue and I believe it will be very well received. I’d like to thank all the members involved and invite all public and collectors to sample this truly unique rose scented edition.”
The WI is currently the largest women’s voluntary membership organisation within the British Isles, sporting 212,000 members across no less than 6,600 groups.
Each WI belongs to one of the sixty nine Federations. The Isle of Man Federation was formed in 1950 and currently has 750 members from a total of thirty WIs; taking an active interest in Island life and its activities.
www.iompost.com
Valerie Caine