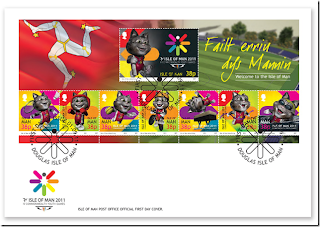 In celebration of the forthcoming Commonwealth Youth Games, to be held on the Island during the first full week of September, the Isle of Man Post Office has issued a miniature sheet of stamps.
Featuring the official Commonwealth Youth Games logo and the distinctive mascot ‘Tosha’, this collection of stamps reflects the seven sporting events which will take place. One thousand athletes aged between 13 and 18 will converge on the Island to participate in athletics, badminton, boxing, cycling, gymnastics, rugby 7s, and swimming.
Previous hosts of the Commonwealth Youth Games since their inception in the year 2000 were Australia, India and Scotland. It was in 2005 that the Commonwealth Games’ Federation decided to hold the event on the Isle of Man in 2011, and now after many years of preparation the organisers are ready to give their visitors a warm Manx welcome. 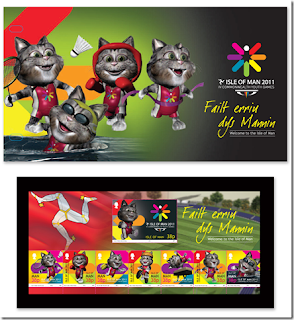 Games Director, Geoff Karran MBE said, “After 6 years of planning we are now very excited that the Games are only days away and we hope to put on an event that the Isle of Man will be proud of and one that will be remembered fondly by our friends from the Commonwealth. All venues are in place and ready for the start of the Games on the 7th September. The all new Bowl Stadium will be the venue for the opening ceremony which promises to be an exciting and memorable event, with a 20 minute entertainment section co-ordinated by ‘Walk the Plank’ and featuring many of the Island’s young artists. The volunteer response from the Manx public has been excellent and highlights the great importance the Manx community place on encouraging young people to take up sport and recreation in order to gain a sense of personal well-being and competitive spirit”. The business community of the Island has also played their part in bringing the 2011 Commonwealth Youth Games to fruition and Mr Karran added, “I would also like to give a big thank you to the Isle of Man Government, the Games’ partners and sponsors whose continued support has helped us tremendously in putting on these Games”.
www.iomstamps.com
Valerie Caine © August 2011