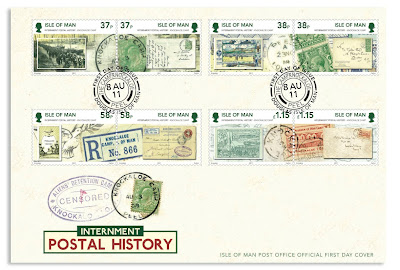 The opening of the Knockaloe Internment Camp during World War I heralded mixed blessings for the Isle of Man. Based on the west coast (a little south of Peel) at its peak the purpose-built prefabricated huts housed an astonishing 24,000 men, bolstered by a combined military and civilian workforce of 3,000 individuals and its own railway link to Peel.
Housing so many men, classified at the time as ‘enemy aliens’, also created employment opportunities for Manx people. Arthur Binns Crookall MHK (and later MLC) was a typical example. Known as both a caterer and a philanthropist he was awarded the contract to feed 28,000 people each day during World War I, initially at the Douglas Camp and later at Knockaloe. Famous Manx born artist and designer Archibald Knox also worked at the camp as a mail censor for the duration of the war.
There is little trace of the camp today, but in recognition of its place in the Island’s history the Isle of Man Post Office has released a selection of items detailing some of the activities at the camp. A miniature sheet focuses on the postal history of the Knockaloe Camp, but a specially formulated Presentation Pack and First Day Cover allows us an insight into the daily life and work of the internees. A number of reproduction postcards show the camp in detail and also the stunning creative talent of some of the internees, with others concentrating more on the postal activity of the camp. This includes a specially designed internal stamp used to send mailed items from one camp to another and a number of cancellation marks specific to Knockaloe Camp.
www.iomstamps.com
Valerie Caine © August 2011