Isle of Man Stamps – The Battle of Clontarf

Valerie Caine Posted on April 19, 2014 Posted in Uncategorized
As Ireland prepares to celebrate the millennium of the Battle of Clontarf, Isle of Man Stamps has issued a set of six stamps to commemorate one of the most definitive battles of Irish history.
But the Isle of Man is closely linked to this event by the Vikings Bródir and Óspak, who gathered a substantial army of men in the western port of Peel before heading off to fight, taking with him a large number of Manx Vikings.
And although stories differ in the retelling, it is suspected that they were implicated in the death of Brian Boru. 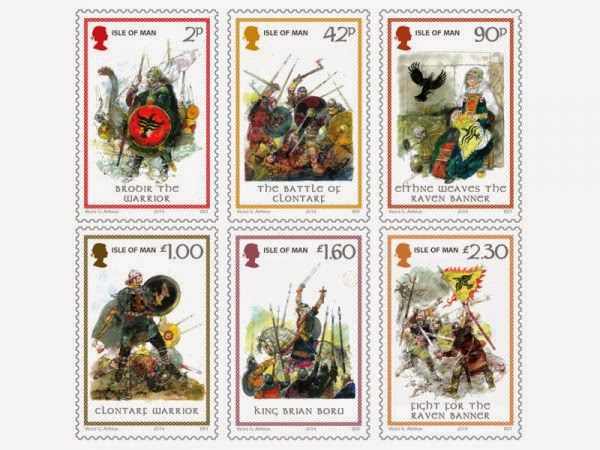 Fought outside Dublin on the 23rdApril, 1014, (Good Friday) the Battle of Clontarf marked a turning point in Ireland’s history and introduced a new era for the country.
Isle of Man Stamps commissioned artist Victor Ambrus to create six individual images of the battle, including some of the principal characters, using water-colour and ink to capture the sense of stark brutality.
General Manager of Isle of Man Stamps and Coins, Maxine Cannon, said, “Victor Ambrus has produced some amazing images that capture crucial events in the thousand year old shared history of the Isle of Man, Ireland and the Orkney Isles. The Battle of Clontarf is a key event in history that has shaped the future of Ireland and of course the Isle of Man. These stamps pay a great tribute to the memory of the battle and King Brian Boru. We are very pleased to be able to offer our collectors such an important piece of history.” 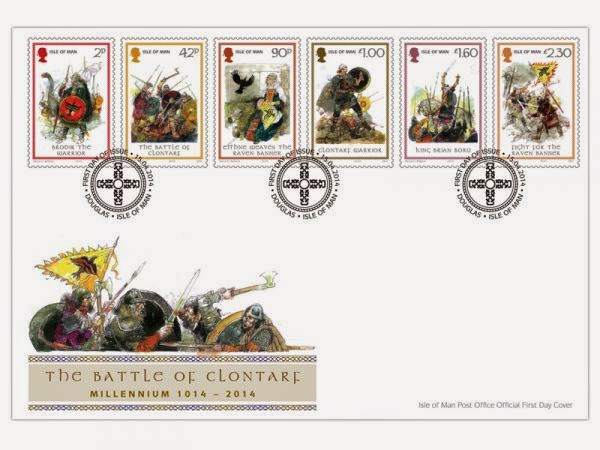 The text is supplied by Dr Howie Firth, providing a short, but detailed account of the events which led to the death of the legendary Brian Boru. His narrative also includes selected quotations and comment from chroniclers of the period.
Dr Firth commented, “It’s tremendous that the Isle of Man Post Office is marking the 1000thanniversary of an event that has resonated through the centuries in stories and sagas. The battle affected the lives of so many people and communities, from Ireland and Man to Orkney and Iceland. The sea route from Norway down through the Irish Sea and on the Mediterranean was one of the great trading highways of Europe at the time, and the Isle of Man was part of the complex mix of commerce and politics.”
Valerie Caine
© April 2014