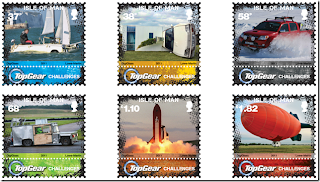 Who doesn’t love Top Gear??  For their latest stamp issue the Isle of Man Post Office has combined the bizarre and the challenging in celebration of the most popular motoring programme on British television.
In a departure from their usual themes the Isle of Man Post Office has depicted some of the most innovative ‘transport solutions’ brought to life by the three presenters of the TV programme ‘Top Gear’.
The six stamps include their attempts to build a motorhome, design a successful aquatic car and invent an unreliable Robin Reliant Space Shuttle; whilst the remaining three feature their triumph in reaching the North Pole using a modified Toyota Hilux, disappointment with their plans for a caravan airship and the triumph and failure of designing an electric car. Despite its excellent performance it failed to impress the demands of selected independent road testers.
For further information about the bizarre antics associated with this latest stamp issue visit the Isle of Man Post Office website.
www.iomstamps.com
Valerie Caine © October 2011