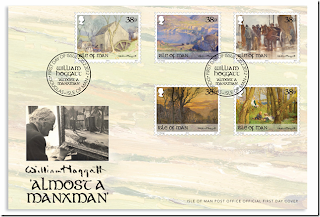 Hoggart was a friend of my grandparents and I have a hand painted Christmas card from him to them.
Although William Hoggatt was born and educated in Lancaster he was to spend fifty four years living and painting on the Isle of Man and would describe himself as ‘almost a Manxman’.
The son of a joiner, Hoggatt’s obvious flare for art won him a scholarship to the Royal College of Art in London which he declined on the pretext that ‘he wanted to work freely’. Electing to become an apprentice at a firm of stained glass manufacturers, Hoggatt continued his art studies at the Storey Institute in Lancaster. The quality of Hoggatt’s work was noticed by Herbert L. Storey, the son of the founder of the Institute, who generously paid for the young artist to study at the L’Academie Julian in Paris under the watchful eye of Jean Paul Laurens 1901 – 1903.
Returning to England Hoggatt rented a cottage at Caton, near Lancaster and took up painting as a full-time career, including a brief spell at the Tate Gallery in London. A significant turning point in Hoggatt’s lengthy career, he met Leonard Archer who invited Hoggatt to his home at Chalfont St Giles. Hoggatt met Leonard’s sister, Dazine, and they quickly agreed to marry, but the match was strongly opposed by their parents. Despite this they eloped to the Isle of Man and in 1907 Hoggatt moved into ‘Glendown’ in Port St Mary. Sending for Dazine shortly afterwards they married at Kirk Christ in the parish of Rushen.
Hoggatt worked with oils, watercolours and pastels, exhibiting both at home and abroad in a number of respected galleries, and was elected a full member of the Royal Institute of Painters, the Liverpool Academy and the Royal British Colonial Society of Artists.
His first one-man exhibition at the Hampstead Art Gallery in London included sixty paintings of the Isle of Man, many of which were sold during the exhibition, prompting stronger recognition of the artist’s talents.
The Hoggatts remained faithful to the south of the Island and in 1926 moved to ‘The Darrag’ in Port Erin where they remained until their deaths.
Hoggatt also exhibited locally with the Isle of Man Artists’ Exhibitions in the 1930s and later with the Mannin Art Group, where he was vice-president. But he also won a competition to design a commemorative stained glass window in celebration of T. E. Brown and designed travel posters and the programme cover for the ‘Festival of Mann’. Two of his paintings were presented to members of the British Royal Family whilst a third was bought privately.
William Hoggatt died in 1961 and was laid to rest in Rushen Churchyard, upon his gravestone these words ‘He loved the Island dearly and revealed to its people its wondrous beauty’.
Valerie Caine © February 2012