Isle of Man students win 'grow your own' clothing award

Kelly McCarthy Posted on June 18, 2013 Posted in Uncategorized
A group of students from the Isle of Man have received a three-year funding programme to “grow their own” clothes.
They won a category in the Observer Ethical Awards with their green tea, sugar and bacteria material. 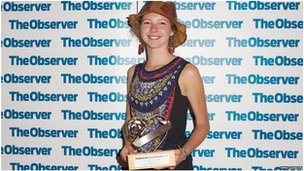 Millie Barrow, Emma Howard, Annabell Jose and Grace Harrop were chosen from more than 400 entries to become the Ecover Young Green Champions for 2013.
The Queen Elizabeth II High school pupils will be given £6,000 a year for their project, Grow Your Own Clothes.
Millie Barrow, 16, said the idea revolved around the tea solution.
“The clothes are made from a cellulose mat (kombucha) which is grown from the solution – it was inspired by watching a BBC news article by fashion designer Suzanne Lee.
“It sounds strange to grow your own clothes but we hope the idea will gain enough publicity for people to think harder about the consequences of the clothes they buy.
“We want people to think about the alternatives. We are going to experiment with different growing mixtures, dyes and assembly methods,” she said.
The annual Observer Ethical Awards have been running for eight years with the aim of recognising “environmental and social justice”.
BBC Ellan Vannin — a great news source  Grow your own clothing